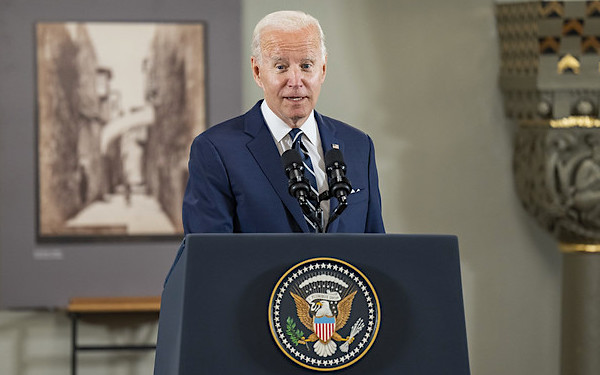 A CNN guest questioned White House and Biden administration officials Tuesday for walking back remarks President Joe Biden made on COVID-19 during an interview that aired Sunday.

“When the White House reviewed a transcript of Biden’s comments after the interview, which was taped earlier in the week, it did not alert its Covid team — leaving the administration without a coordinated response for the immediate aftermath. Huh?” CNN host John King asked Laura Barron-Lopez, the White House correspondent for PBS Newshour.

“Yeah, I mean, we’ve essentially left people like the Surgeon General, like Anthony Fauci, to have to go out there this — you know, in the past few days, to say, well, this is actually what the president meant, meaning that he is saying that — you know, they’re being translators, which doesn’t look good for President Biden,” Barron-Lopez said. “It isn’t good for the White House, particularly when there are roughly 300 people dying a day of Covid.”

Biden also vowed to use American troops to defend Taiwan in the event of an attack by Communist China, downplayed the August inflation numbers and said he had not made his mind about a 2024 re-election bid during the interview. Aides also issued clarifications in the wake of Biden’s declaration regarding American troops defending Taiwan.

“I will say this, I do think, although scientifically, you know, his comment was bad, people are thinking that, right?” Carl Hulse, the New York Times congressional correspondent, said. “He’s sort of reflecting what ordinary people are thinking if there’s not another variant, well, you know, everybody is kind of going back to the office. I see where it came from, but it created a big problem that cleanup on aisle Covid now for the next week or so.”