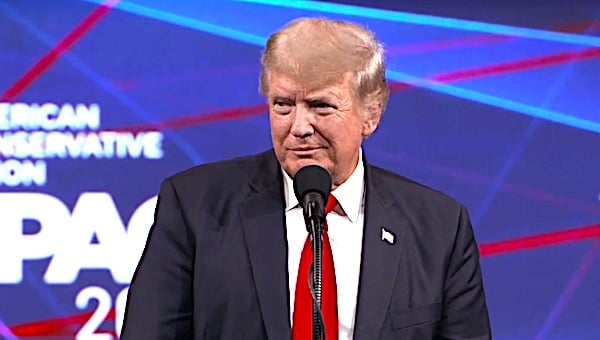 President Donald Trump, known for his blunt and often insulting social media comments while in office, was on familiar ground responding to Joe Biden's Philadelphia speech, in which the Democrat blamed patriotic Republicans for trying to kill democracy.

And he suggested to the Washington establishment, "Someone should explain to Joe Biden, slowly but passionately, that MAGA means, as powerfully as mere words can get, MAKE AMERICAN GREAT AGAIN! If he doesn't want to Make America Great Again, which through words, action, and thought, he doesn't, then he certainly should not be representing the United States of America!"

Biden's speech, highly partisan while he stood in front of a blood-red backdrop and was flanked by U.S. Marines, essentially tried to make the entire 2022 midterm elections about President Trump.

That would divert the public's attention from Biden's own southern border crisis, rampant inflation that has hit America's low- and middle-income families extremely hard, food prices up by double digits, gasoline in the $6 range although it has edged back a bit in recent weeks, massive spending on "green" projects through the misnamed "Inflation Reduction Act" and more.

Trump took to his own social media platform to respond to Biden, who claimed that Republicans are even now trying to "steal" the 2022 election.

Commentators called that comment, after the Democrats' actions during 2020, pure projection.

During the 2020 election, states ignored their own election laws in ways that benefited Biden, Mark Zuckerberg spent $420 to influence the vote for Biden, and the facts now reveal that the FBI warned social media to suppress damaging information about the Biden family's international business schemes, prompting commentators to conclude that the FBI actually manipulated the election for Biden's benefit.

The Daily Mail described Trump as "furious" as he slammed the "awkward and angry" Biden.

The Mail reported, "It was a speech that sparked huge backlash from Republicans accusing him of being divisive, and reminded Biden that in October 2020, he said: 'Instead of treating each other’s party as the opposition, we treat them as the enemy. This must end!"

Sen. Ted Cruz, R-Texas, noted, "Tonight, Joe Biden vilified millions of Americans in a divisive & angry speech that was detached from the reality of his political failures. He isn’t actually interested in restoring the soul of the nation, he’s only interested pitting his fellow Americans against one another."

Biden took over the facilities at Independence Hall in Philadelphia for his political attack, claiming, "Donald Trump and the MAGA Republicans represented extremism that threatens the very foundations of our republic."

White House spokeswoman Karine Jean-Pierre had promised earlier that the speech would be "optimistic," not "political."

His speech was a demand that voters continue Democrat majorities in the Senate, which is up for grabs, and the House, which experts expect to GOP to win.

Biden's speech capped a week in which he called Republicans "semi-fascists."

Also, former senior adviser to two presidents Christian Whiton charged Biden was hysterical as he was demonizing millions of Republicans.

In a commentary, Whiton wrote, "President Joe Biden thinks millions of Americans are part fascist and borderline terrorists. It would be laughable if it weren't so disturbing. Having worn out the label of 'racist,' which Biden and his political allies have applied to just about any political opponent, the dotard president has moved on to new baseless and dangerous insults."

Bob Unruh
Bob Unruh joined WND in 2006 after nearly three decades with the Associated Press, as well as several Upper Midwest newspapers, where he covered everything from legislative battles and sports to tornadoes and homicidal survivalists. He is also a photographer whose scenic work has been used commercially.
Kari Lake reveals 'illegally counted' ballots, Dems demand felony charge
Biden accused of 'abandoning' women to complications including 'death'
'We must be naked': Hunter Biden 'demanded sex from employee'
Damar Hamlin's recovery energizes Americans' belief in prayer
11 U.S. cities among 50 most dangerous in world, all share 1 factor
See more...