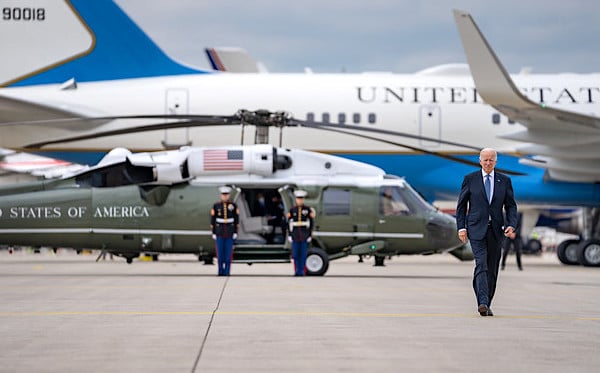 Joe Biden boards Air Force One at Munich International Airport, Tuesday, June 28, 2022, en route to the NATO Summit in Madrid. A support plane is seen on the tarmac behind Marine One. (Official White House photo by Carlos Fyfe)

Fox News host Tucker Carlson, in a commentary about the apparent vandalism of the Nord Stream undersea natural gas pipelines from Russia to Europe, says it's hard to comprehend, but the facts are that the "people who very may well be responsible for letting methane into the Baltic Sea and into the atmosphere at a scale that most people can't imagine" could be officials in the U.S. government.

"The people lecturing you about your SUV may have blown up a natural gas pipeline and created one of the great catastrophes of our time in its effect on the environment," he explained.

In his online commentary, he said it was "one of the great environmental catastrophes of our time, is unfolding tonight off the coast of Denmark."

"As we speak, Nord Stream 1 and Nord Stream 2 are pouring millions of cubic meters of natural gas into the Baltic Sea. Pictures from the air … You can only guess at how many marine mammals are being killed right now – countless. But the lasting damage may be to the atmosphere."

That's because, he said, "Natural gas is comprised of up to 90% methane. Methane, as Joe Biden has often told you, is the key driver of global warming, which is, of course, an existential threat to humanity and the planet. So, if you're worried about climate change, what just happened to the Nord Stream pipelines is as close to the apocalypse as we have ever come. So, the question is, how did this happen? And it turns out it was not an accident."

He continued, "So, the question is, who did it? And of course, the prime suspect is obvious. It would be the same man who caused domestic inflation here in the U.S. and stole the 2016 election from Hillary Clinton. That be Vladimir Putin."

He said the Canadian ambassador to the U.N. already has charged Putin decided to use "pollution as an act of war," and Carlson said, "Progressive Twitter strongly endorsed this conclusion. Putin did it and that makes sense until you thought about it for just a moment."

He pointed out Vladimir Putin may be "evil," "but is he stupid? Probably isn't stupid and yet and, here's the strange part, if you were Vladimir Putin, you would have to be a suicidal moron to blow up your own energy pipeline. That's the one thing you would never do. "

He said those pipelines are Putin's "main source" of power and wealth and most critically, leverage over other countries.

But Carlson said there are others who might want to blow up the pipelines.

"We know they have considered it because at least one of them has said so in public. In early February, less than three weeks before the war in Ukraine began, Joe Biden suggested on camera that he might take out these pipelines.

In fact, Biden said at the time that, "If Russia invades … there will be no longer a Nord Stream 2. We will bring an end to it."

Carlson explained, "Notice how he phrased it and he's the president. He doesn't phrase things by accident, particularly his reading off cards. He didn't say, I will pause the delivery of gas from Russia to Germany. He said there won't be a Nord Stream 2. We'll put an end to it. Will take it out. Will blow it up. "

Carlson said, "This is the president who has declared climate change the most pressing emergency in the history of the world. This is the man who lectures you about using a woodstove or driving an SUV because of its emissions. This is the guy who spent billions trying to mitigate cow flatulence because methane. Would that guy really blow up a methane pipeline in the middle of the Baltic Sea? It was hard to imagine. "

He also said it would be "an unimaginably reckless act. That would be the kind of thing you would do if you wanted to start a nuclear war. It would be insane and yet in retrospect, it's obvious they were thinking about this because Joe Biden wasn't the only person to suggest it."

He cited comments from Toria Nuland at the State Department, which pretty much were the same.

"Did the Biden administration really do this? It's hard to believe. Given that it's an atrocity, it's effectively an act of terrorism, we don't want to make that accusation, but we should tell you that maybe not coincidentally, today, a brand-new pipeline was unveiled, a pipeline that carries non-Russian natural gas in roughly the same areas, Nord Stream 1 and 2. This is called the Baltic Pipe. It was inaugurated in Poland. It will carry natural gas from Norway through Denmark to Poland and other countries nearby. And it's likely to do very well, since now it has less competition."