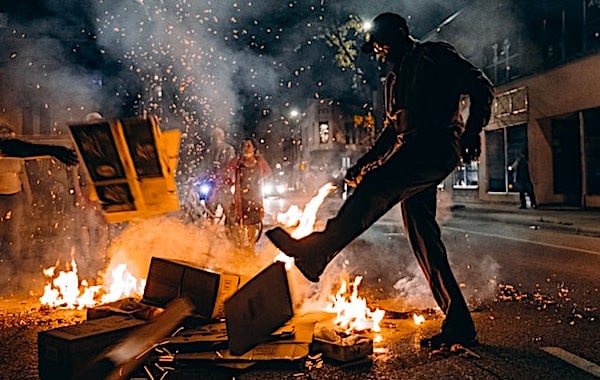 (Photo by Kayle Kaupanger on Unsplash)

“Over the last several weeks we have watched our unifying president slash our country in half with a knife. Biden told us MAGA Republicans are domestic terrorists that threaten democracy. We all know the man is full of it,” Watters said. “People are actually listening to this stuff and they are believing in it. Members of the House [of Representatives], the Senate, and the media are all lining up to fight the war on MAGA terrorism. And the attacks are coming from multiple fronts: securing the border, the pro-life movement, parents standing up to radical school boards, all of that is being defined as domestic extremism.”

Watters played a series of clips featuring Democrats attacking Trump supporters, including remarks by Democratic Sen. Mazie Hirono of Hawaii, who said that legislation introduced by Republican Sen. Lindsay Graham warranted a “call to arms” and Democratic Rep. Hank Johnson of Georgia, who claimed parents showing up at school board meetings was akin to the Jan. 6 riot at the Capitol.

“This language is intentional because it justifies whatever they do next. And what are they going to do next? Whatever they want. Whatever they can get away with,” Watters said. “MAGA Republicans are right-wing extremists, they are threatening democracy, well, in that case nobody has a problem with the FBI spying on them. But, here’s the thing. The same people who kicked and screamed when the FBI surveilled Muslims after 9/11, haven’t said a word about the FBI spying on conservatives. And guess what? They are.”

“Sources within the Department of Justice told The New York Post that Facebook has been reading users’ private messages and then passing those conversations along to the FBI. They apparently have been doing this without a subpoena illegally,” Watters continued. “They look for people whose political opposition flag the conversation and send it to the feds. This is bad. This is scary.”

Hanson claimed the Democrats were ramping up the rhetoric to distract from an “inevitable loss” in the November midterms, and that “MAGA people” hadn’t engaged in rioting during the summer of 2020.

“You know, there is not Mitch McConnell is not leading a bunch of angry conservative mobs out to the Supreme Court threatening Justices Kagan and Sotomayor by name the way Chuck Schumer is,” Hanson said. “There’s not MAGA people showing up at the home of Justice Sotomayor threatening her. There’s not a right-wing assassin lurking around a Supreme Court justice’s home.”

“So, we know where the violence is coming and they project it on the right because they don’t have a message that the majority of the people feel…is helping America. And they want to distract us,” Hanson continued. “This is not new. It happened during the Obama administration when Janet Napolitano said the greatest terrorist threat are returning veterans from Iraq, so it’s an old idea. Any left-wing magazine, the Nation, the New Republic, they are talking about succession and talking about a new civil war. But the violence is coming from the left.”