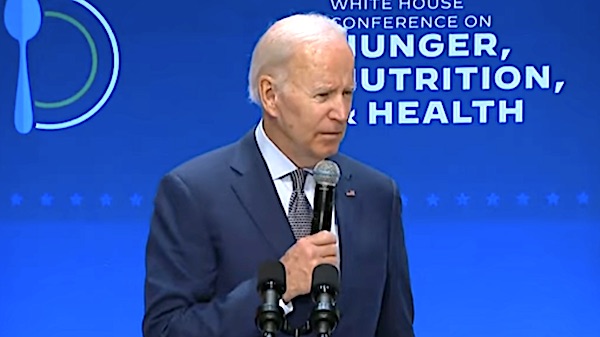 Joe Biden asking for Rep. Jackie Walorski, even though she was deceased. (Video screenshot)

(DAILY MAIL) -- The White House launched a confusing and nonsensical explanation for why President Joe Biden was looking for late Representative Jackie Walorski during an event after she was killed in a car crash in Indiana last month – and claimed she was 'at top of mind.'

The briefing room devolved into shouts as Biden's Press Secretary Karine Jean-Pierre sent reporters into a tizzy during Wednesday's briefing when she repeatedly suggested that the president did not forget Walorski was dead when calling out for her during his remarks earlier in the day.

Biden, 79, asked the crowd gathered for the White House Conference on Hunger, Nutrition, and Health in Washington, D.C. where Walorski was located as he thanked lawmakers for their work on a plan to end hunger in the U.S. by 2030.