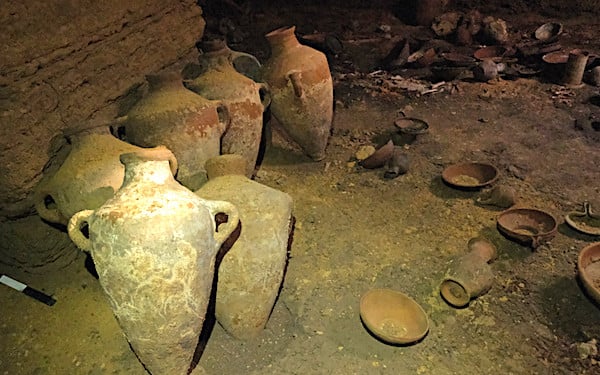 (TIMES OF ISRAEL) -- A team of archaeologists was essentially transported back in time when it entered an untouched 3,300-year-old cave at the Palmachim National Park, just south of Tel Aviv, last week. The vast array of discovered items date to the Late Bronze Age, close to or during the rein of the biblically notorious Ramses II.

The cave was spotted when a rock shifted during the course of construction work and light was literally shed on an intact burial assembly about 2.5 meters (eight feet) below. Israel Antiquities Authority inspectors were called to the scene and their excitement is felt in a Hebrew-language video recording an initial inspection of a place no person has walked for more than three millennia.

“Simply amazing,” said IAA’s Uzi Rothschild repeatedly as “Wow, wow,” is heard in the background. “There are jars inside the jars! Wow!” said another voice. “Unbelievable!” said Rothschild.