From the authoritative Congressional Constitution Annotated website is the following.

The President, Vice President and all civil Officers of the United States, shall be removed from Office on Impeachment for, and Conviction of, Treason, Bribery, or other high Crimes and Misdemeanors.

From footnote 7: "… Joseph Story, Commentaries on the Constitution of the United States § 762 (1833) Not [just] crimes of a strictly legal character fall within the scope of the [impeachment] power, (for, as we shall presently see, treason, bribery, and other high crimes and misdemeanours are expressly within it;) but that [impeach power] … has a more enlarged operation, and reaches … political offences, growing out of personal misconduct, or gross neglect, or usurpation, or habitual disregard of the public interests, in the discharge of the duties of political office."

By definition, unconstitutional behavior fits the definition of "high crimes and misdemeanors."

WND's Joseph Farah has argued that deposed President Donald J. Trump could be made speaker of the House should Republicans recapture Congress in 2022 midterms. Once a new Congress is seated in 2023, Farah and others have made the case for a "stealthy route" back to the White House by a Republican dominated Congress impeaching Joe Biden and Kamala Harris.

While possible, it isn't easy. Impeachment is easier the more Republicans control the House and Senate. Impeachment in the House is by simple majority. But it must be followed by a removal-from-office vote in the Senate of two-thirds, or 67 elected senators.

Left-leaning Wikipedia notes that 14 Senate Democrats are up for reelection on Nov. 8. Several are from deep blue (i.e., Democratic) states, including California, Oregon, Washington and New York. All 435 House seats and 35 seats Senate seats this year are contested.

Per Wikipedia below, 14 of those Senate seats are held by Democrats and 21 by Republicans. 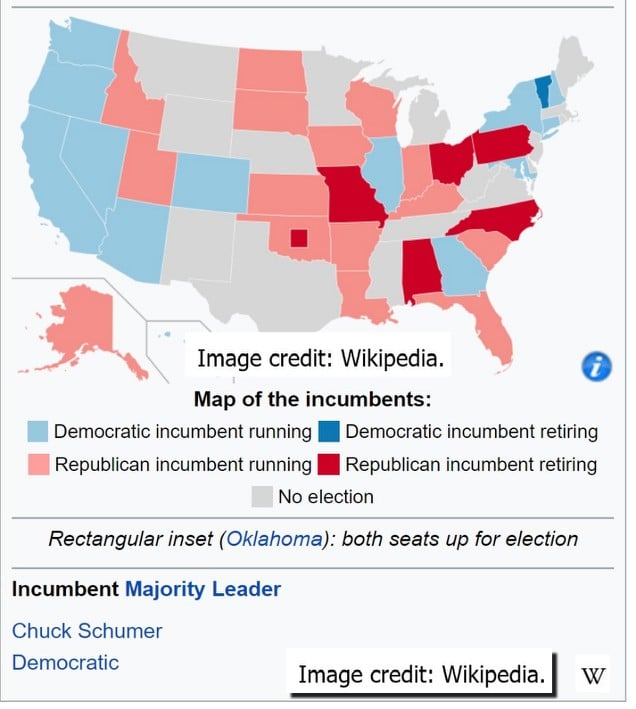 "Right-track, wrong-track" polling has some 80-plus percent of the population unhappy with the direction of the country. Americans already unhappy. Voters must recognize that the party in power – Democrats – must be turned out of office by the most rapid legal means possible.

High levels of dissatisfaction must be recognized by all people of goodwill, including independents and regardless of normal Democrat-Republican party affiliation.

Let's be clear. These are not normal times.

Left-leaning Poynter.org reported in June: "In poll after poll, about 70% of Republicans say they don't think Joe Biden is the legitimate winner of the 2020 election." They're not alone. That may be unprecedented.

Furthermore, millions were better off economically three years ago (pre-COVID-19), noting the "pandemic" and its handling by public officials merits its own analysis.

High-level dissatisfaction among people of all parties creates a unique opportunity to resolve this pain before the 2024 election cycle.

Plan A: Voters, regardless of normal party affiliation, must straight-vote Republican in the 2022 midterms. Then, Republicans could make Trump House speaker. After House impeachment, voters would then need to pressure enough Democratic senators to vote with Republicans in 2023 to remove Biden and Harris from office. The House speaker then becomes the president.

Plan B: Quo Warranto. Per Law.Cornell.edu: "A writ of quo warranto is a common law remedy … [challenging] a person's right to hold … public … office." Theoretically, either method could make Trump president in 2023. That's my evidence-based view as an award-winning history buff, publisher, business professiona, and political independent whose family has at times supported members of either major party.

L.A. "Tony" Kovach is the co-founder of MHProNews and MHLivingNews which are widely acknowledged to be the largest, most-read and evidence-based trade media serving the affordable housing and mobile home/ manufactured housing profession and consumers.