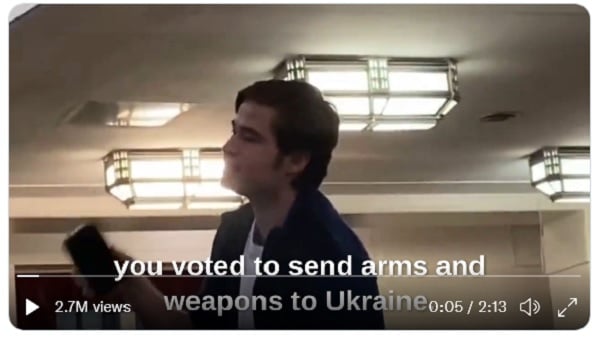 A staged question and answer session by U.S. Rep. Alexandria Ocasio-Cortez, D-N.Y., was interrupted by anti-war protesters who charged her with becoming part of the Washington establishment by supporting the Ukraine war, which they warned could become "nuclear."

"Congresswoman. None of this matters unless there's a nuclear war which you voted to send arms and weapons to Ukraine," shouted the first of who protesters, not identified on the social media posting that included their comments.

"Tulsi Gabbard she's left the Democratic party because they are war hawks … you ran as an outsider yet you've been voting to start this war in Ukraine. You're voting to start a third nuclear war with Russia and China. Why are you playing with the lives of American citizens?"

A second protester then joined: "There will be no neighbors if there's a nuclear bomb. You voted to mobilize and send money to Ukrainian Nazis. You're a coward. You're a progressive socialist? Where are you against the war mobilization?

"He's telling the right truth. You have done nothing. Tulsi Gabbard has shown guts, where you've shown cowardice.

"I believed in you and you became the very thing you sought to fight. That's what you've become. You are the establishment, and you are the reason why everybody will wind up in a nuclear war unless you choose to stand up right now and denounce the Democratic Party.

"Will you do that. Yes or no. Are you going to stop nuclear war yes or no," he said.

For a time, Cortez was unable to control the direction of her event.

The second protester continued, "None of this matters if we're all dead. None of it. You know that. Then let's take it up right now because this is the only thing that matters. … We could be in a nuclear war at any minute and you continue to fund it…"

AOC humiliated at a Town Hall:

"You ran as an outsider yet you voted to start this war in Ukraine. You're voting to start a nuclear war with Russia and China" pic.twitter.com/dSldpyKVLT

The Washington Examiner explained Cortez voted to send $40 billion in military and humanitarian aid to Ukraine in May. She also brought legislation to provide debt relief to Ukrainians.

"As Ukraine fights against the Russian invasion, we have a moral obligation to assist any way we can,” Ocasio-Cortez said on social media at the time. “The Ukraine Comprehensive Debt Payment Relief Act would work to support the immediate suspension of Ukraine’s debt payments, help coordinate comprehensive debt relief, and more.”

Gabbard, in fact, after being a brief candidate for the Democrat Party's nomination for president, fled the party this week and denounced its leadership are "an elitist cabal of warmongers."