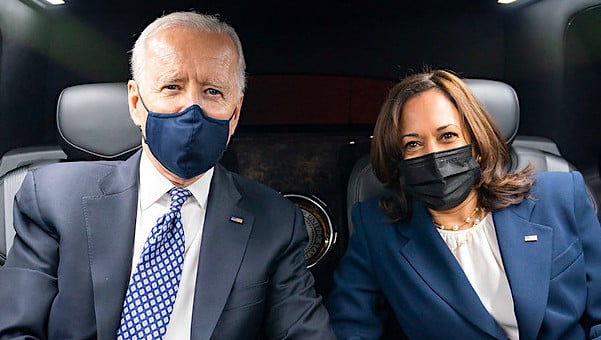 Joe Biden and Kamala Harris pose for a photo as they ride in the presidential limousine from Emory University in Atlanta Friday, March 19, 2021, to Peachtree Dekalb Airport. (Official White House photo by Adam Schultz)

Amid crushing inflation fueled by an accelerated push for "renewable" energy, record-high government spending and foreign-policy failures, President Biden announced a major initiative to cut down on "junk fees" from banks, airlines, cable companies and other industries that he emphasized will especially help "people of color."

Among the "junk fees," he said Wednesday at the White House, is the airlines' fare system, which enables people to pay less if they don't mind having a little less leg room.

"Some airlines, if you want six more inches between you and the seat in front, you pay more money," Biden told Americans.

"But you don’t know it, until you purchase your ticket," said the president.

President Biden announces his initiative Oct. 26, 2022, to eliminate and cut down on "junk fees" (Video screenshot)

“Look folks, these are junk fees," he concluded, referring also to banking and other fees, "and they are unfair, and they hit marginalized the hardest, especially low-income folks and people of color."

The fees, he said, "benefit big corporations, not consumers."

Biden: "Some airlines, if you want six more inches between you and the seat in front, you pay more money but you don't know it ... these are junk fees, they're unfair and they hit marginalized Americans the hardest, especially ... people of color." pic.twitter.com/u8IbCqpRZG

Biden seemed to suggest that the higher fare for extra legroom was a hidden fee.

In fact, airlines present to consumers purchasing a ticket online a variety of fare categories rather than the traditional first class and coach.

For example, United Airlines offers "basic economy," "economy" and "economy plus," along with business and/or first class.

Biden said his administration is targeting late fees, such as on credit card account payments, along with banking overdraft and bounced-check fees and hotel booking charges.

The news conference comes as polls show Republicans are poised to retake the House and possibly the Senate with a message focused on the economy and inflation. Democrats, meanwhile, have been fixed on issues such as abortion, student loans and their claim that Donald Trump and people who believe in limited government, securing the border, parental rights, election integrity and a foreign policy of deterrence are a threat to democracy.

A White House fact sheet released Wednesday said the Biden administration is calling for the reduction or elimination of hidden fees, charges and add-ons that collectively can amount to more than $400 per month for consumers and $24 billion overall.