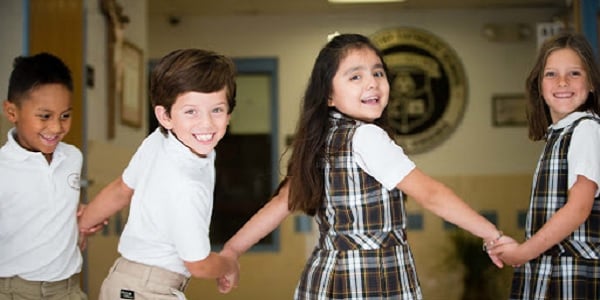 According to a data analysis performed by Kathleen Porter-Magee, an adjunct fellow at the Manhattan Institute, “If Catholic schools were a state, they would be the highest performing in the nation on all four NAEP tests.”

Amid a contentious national debate over who should exercise greater control over what children learn – teachers or parents – this nugget of information may prove to be kryptonite to one side of that argument.

The National Assessment of Educational Progress (NAEP) bills itself as the “nation’s report card,” and has been handing out grades since 1969. A Congressionally mandated program, the NAEP provides an essential snapshot of what students know in Math and Reading every two years, helpfully broken down by hundreds of factors, including race/ethnicity, socio-economic standing, and gender.

NAEP results are also separated by school type, enabling Ms. Porter-Magee to compare achievement in Catholic schools on an even basis with their public and non-parochial private counterparts.

As her chart reveals, the Catholic schools have reason to flirt with the sin of pride.

Results show Catholic schools exceeded both public schools and charter schools by wide margins. Of course, they were given quite an assist from the gross underperformance of their competitors, which notched the worst scores in nearly 20 years.

Nationally, declines in average reading and math scores reached the double digits from 2019 marks. The decline in math scores was the largest ever recorded.

NAEP scores for black students were, on average, two times lower than their white counterparts, showing the so-called achievement gap is both real and growing. Ear-splitting assertions of unconscious bias, white privilege and systemic racism have proven to be poor strategies for closing that gap, despite having informed education policy for decades.

It appears the gap hasn’t noticed.

What might be of greater utility than incessantly bleating about systemic whatever, is using a core competency-based curriculum, with clear and enforced expectations, which not coincidentally, is a hallmark of Catholic education.

The Twitter response to Porter-Magee’s research again showed the left’s unshakeable commitment to recycling tread worn tropes. The discourse devolved swiftly, with critics claiming the Catholic school scores were simply a product of a higher socio-economic status enjoyed by their students, and a selection bias favoring higher achieving Whites for admission.

Again, turning to the data, we find Catholic schools outperformed national, charter, and public-school averages for black, Hispanic, and low-income students as well – on all four tests, putting the lie to both the selection bias argument and the “their kids are richer!” excuses.

Predictably, the “we-know-better-than-you” crowd is blaming this disaster on COVID, systemic racism and insufficient funding for public schools. Once more, the data sets things right.

Test scores were trending downward well before the pandemic, showing the drivers of educational mediocrity were only exacerbated by COVID restrictions, not created by them. Of course, the lack of funding argument is a Pavlovian response to any criticism, and a reliable indicator the educational establishment has again been caught with their pants down.

America’s per student expenditures are anything but meager.

Systemic racism is the stalking horse du jour for all that ails society. Its inherently ephemeral nature makes it an ideal skirt behind which failure can hide. However, it falls flat on a number of fronts.

Who is the “system” from which the racism springs?

The political left has enjoyed near hegemonic control over education in the United States for the better part of the last century. If systemic racism exists, it must then be a child of the left. In education, the left IS the system.

Factors far more impactful than any of the above is having both parents in the home, and a family that makes academic achievement a high priority. These circumstances are increasingly absent in modern American society.

Catholic schools also placed a higher priority on in-person learning than did their public and private school counterparts during the pandemic, leading to them resuming in-school instruction nearly a full academic year sooner.

Teaching is a hands-on endeavor if one wishes to achieve top results. Screens cannot replace the attentiveness of an engaged professional dedicated to preparing their students for success.

Catholic schools have shrugged off the relentless educational faddishness that so thoroughly distracts the public schools. Finding their footing on a firmer foundation, Catholic schools have prioritized responsibility, accountability and achievement, in stark contrast to the public-school grails of indoctrination, gender ideology and social activism.

There is no alternative to competency, and no surer way to achieve it than through an educational system that knows what it believes and why. How can public schools ground their students in shared competency when they can scarcely decipher the difference between the boy’s and girl’s restrooms on any given day?

The Catholic schools don’t have that problem, and consequently, neither do their students.

Joe Herring is a staff writer for The Lion.

The views and opinions expressed in this commentary are those of the author and do not reflect the official position of the Daily Caller News Foundation.