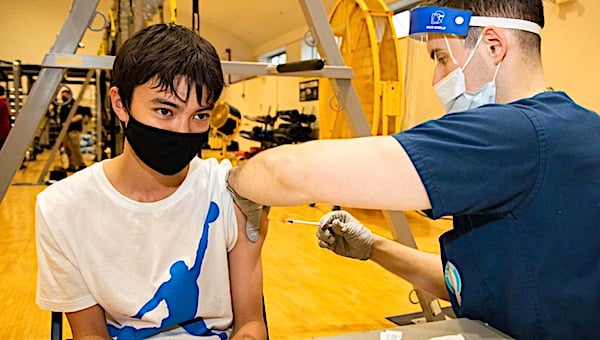 Armed with information from dissenting health scientists, parents in a number of states convinced their health board to reject bids to add the COVID-19 vaccine to the list of required shots for public schoolchildren.

And parents across the nation are demonstrating their lack of trust in the experimental mRNA vaccines issued under emergency use authorization, with only about 2% of children under 5 and less than one-third ages 5 to 11 having been fully immunized.

Nevertheless, the CDC is poised to address the "vaccine hesitancy" and the pharmaceutical companies' lack of permanent liability with one vote.

The CDC's Advisory Committee on Immunization Practices is scheduled to decide at its meeting Wednesday through Thursday whether or not to include COVID-19 vaccinations in their pediatric immunization schedule.

Approval not only would make it more likely that states will mandate COVID-19 shots to attend public school, it could grant permanent legal immunity to vaccine makers Pfizer and Moderna along with another profit windfall, health scientists are warning.

"This is a dangerous idea that will only benefit the vaccine manufacturers at the expense of the best interests of kids," said the American Association of Physicians and Surgeons (AAPS) in a statement. "Not only do the shots have essentially no meaningfully positive impact on children's health, the fact that the risk of severe adverse events are greater than any potential small benefit is becoming increasingly evident."

AAPS Executive Director Dr. Jane Orient has weighed in on the CDC proposal through the public comment page the federal government has provided, which will remain open until the meeting.

"Recommending a product that has serious safety signals, which is unnecessary because of widespread natural immunity and a generally mild disease, and which possibly has negative efficacy, is an egregious violation of regulatory procedures, and a profound violation of public trust," she wrote in part.

In its statement, AAPS also pointed out that making the COVID-19 shots a routine childhood vaccination also would "ensure a steady revenue stream for manufacturers."

And "many entities look to the CDC recommendations when they impose mandates, increasing the likelihood that a COVID shot could be required to attend school."

The AAPS submitted comment to the CDC citing evidence the COVID shots are of no potential benefit to children, with low to negative efficacy, while presenting an unacceptable risk of severe harm.

"What we've learned over the past two, two and a half years, is that the vaccines are a failure for public health policy," he said, noting the CDC itself acknowledged in August that any protection against infection and transmission is only "transient."

The failure to prevent transmission, Risch argued, means there is no legal ground for the government or any institution to mandate the vaccines.

See Dr. Risch's comment to WND on the COVID-19 vaccines:

Schachtel pointed out that the "public health emergency" declarations that began in March 2020 and have been renewed since then give Pfizer and Moderna protection from lawsuits.

But the current emergency declaration, which expires in early 2023, likely will not be renewed.

The Health Resources and Services Administration has spelled out how a vaccine can become free of legal liability: "For a vaccine to be covered, the Centers for Disease Control and Prevention (CDC) must recommend the category of vaccine for routine administration to children or pregnant women, and it must be subject to an excise tax by federal law."