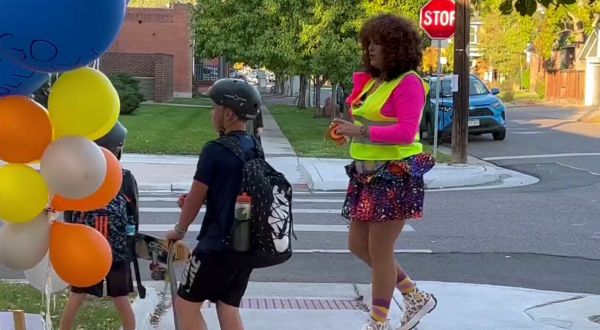 A Denver school featured a drag queen as a crossing guard in celebration of National Walk and Bike to School Day, according to school social media posts.

Drag entertainer Dixie Krystals helped students cross the street at Denver Public School on Oct. 12 as a part of the school’s Walk & Roll to School Day, according to social media posts. Krystals was included as one of the school’s “celebrity crossing guards” in honor of Pedestrian Safety Month.

While at the event, Krystal is seen in a Twitter video donning a yellow safety vest, blowing a whistle and waving several students across the street.

“Drag queens are known for their lewd and sexualized performances, and they have no place in or around schools,” Parents Defending Education Investigative Fellow Alex Nester told the Daily Caller News Foundation. “Yet, for whatever reason, schools have been insistent on giving children access to these performers. It’s immoral, distracting and confusing for children.”

Krystals has been a drag entertainer for 20 years and was featured on the Discovery+ show “Generation Drag,” which features several teenage drag performers and their families leading up to a drag performance, Krystals’ website stated.

It’s #NationalWalkToSchoolDay! And thank goodness we’ve got icons like Dixie Krystals keeping our kids safe as they walk and bike to school. Denver needs more crossing guards so more kids can do just this! Don’t worry – Dixie’s energy level is not a requirement ✨ #9NEWS pic.twitter.com/Wh78brtfde

At least 18 schools within the district participated in the event which had help from National Center for Safe Routes to School, a national organization that works to make it safer for students to walk to school, a video by the school showed. Other celebrity crossing guards a part of the event included Superintendent Dr. Alex Marrero and Democratic Colorado Sen. John Hickenlooper.

“Would Denver Public Schools bring on strippers as cross guards?” No Left Turn In Education’s Chief Communications Officer Yael Levin told the DCNF. “Both drag queens and strippers are adult performers for adult audiences. If you normalize one, you must normalize the other for children. Is either appropriate for children? We all know the answer is no.”

A science museum in Tennessee hosted a family friendly drag event in September as a part of its “Summer of Pride.” The event featured an “intergenerational dance party” for everyone to “come together.”

Denver Public Schools and Krystals did not immediately respond to the Daily Caller News Foundation’s request for comment.