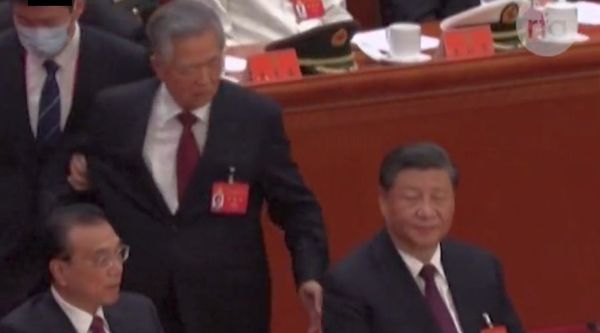 (DAILY WIRE) – A former Chinese president was booted from his seat next to current President Xi Jinping and escorted away Saturday in a shocking scene at the closing ceremony of a weeklong congress widely seen as Xi’s “coronation” as leader for life.

Hu Jintao, who preceded Xi as president of China from 2003-2013, looked confused and even angry as he was unexpectedly hauled away from the closing ceremony of the ruling Communist Party congress. The 79-year-old former leader touched Xi’s shoulder and the two appeared to exchange words, but the current president seemed unmoved. The stunning incident went viral as China experts tried to figure out what it could mean.

“A lot of people very studiously looking straight ahead as Hu Jintao is escorted out of the Great Hall just before Xi’s speech begins,” tweeted Guardian correspondent Helen Davidson. “He seems confused by what’s happening.”