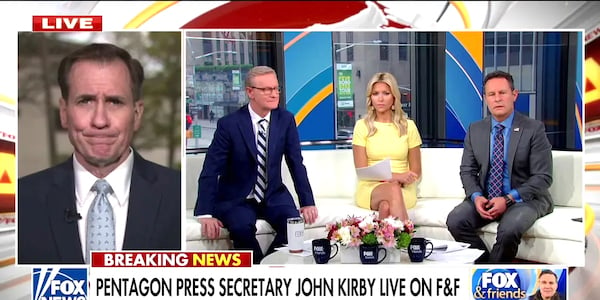 In an effort to defend a U.S. military COVID-19 vaccine mandate that has resulted in the expulsion of 20,000 members, double-boosted Defense Department spokesman John Kirby spoiled his argument in a TV interview by acknowledging he was working from home because he had COVID-19.

Kirby is only the latest example of a top government official or major figure contracting COVID-19 after being "fully vaccinated," illustrating the data indicating the shots actually make recipients more susceptible to the disease.

In the interview on Tuesday, "Fox and Friends" co-host Brian Kilmeade referenced the U.S. Army's announcement that it had fallen short of its recruiting goal by 25%.

"You, as an admiral who knows what it takes and the sacrifice you make to join the military – to get kicked out like this, can you possibly talk some sense into this White House to reverse policy?" Kilmeade asked.

Kirby replied that the vaccines "are a valid military requirement."

"You want your troops to be ready, and part of being ready is being healthy and not having the ability to infect your unit and make their unit readiness any worse than it is," he said.

Kirby then noted he was working from home "because I'm wrapping up my own bout with COVID here over the past 10 days."

Should military members be expelled for refusing a COVID vaccine that doesn't work?
1% (1 Votes)
99% (96 Votes)

The Fox News host pointed out it's now widely acknowledged that the current vaccine does not address the current COVID-19 variants.

"Every one of your branches can’t recruit their threshold, yet you are kicking out good men and women. How do you explain that?" Kilmeade asked.

"Well, look, Brian, first of all the Navy did make their recruiting goals for enlisted personnel this year. Yes, it’s a tough recruiting environment. We recognize that, but it’s also you have a requirement to be healthy to be able to serve, and this is a valid military requirement," Kirby said.

Noting he's been infected, the Defense spokesman contended that "even if it doesn't prevent you from getting COVID ... it makes the symptoms a lot less severe."

The data don't support that contention, however, with the vaccinated and unvaccinated alike experiencing milder symptoms from the omicron variant and its subvariants. In fact, government data from around the world has indicted the vaccinated are more likely to be hospitalized or die from COVID-19.

"No it isn't," Kilmeade retorted. "This is an experimental vaccine that just came off the shelf. You know it's not valid and it's a risk to our national security."

After another exchange, co-host Ainsley Earhardt, wrapping up the interview, said "it's just hard," referring to a previous segment in which they highlighted the story of a Coast Guard rescue swimmer facing expulsion because of the vaccine mandate whose heroism during the Hurricane Ian disaster was praised by President Biden.

Last month, Biden declared in a "60 Minutes" interview the COVID-19 pandemic is over. That came as good news to Florida Republican Gov. Ron DeSantis, who saw the immediate implications.

"So, when will he let those discharged from the military due to vax mandates return to protecting our country?" the governor asked.

"The president recently praised a group of Coast Guard rescue swimmers. One of them reportedly faces termination because he isn't vaccinated. I'm curious, given the threats that we are facing abroad, would the president ever reconsider that vaccination requirement or consider issuing more exemptions?"

"I'm not going to comment from here on an individual case," she said.

Reporter: "The president recently praised a group of Coast Guard rescue swimmers. One of them reportedly faces termination because he isn't vaccinated. Would the president ever reconsider?"

WH Press Sec: "I'm not going to comment on an individual case." pic.twitter.com/cTIFbiQehM