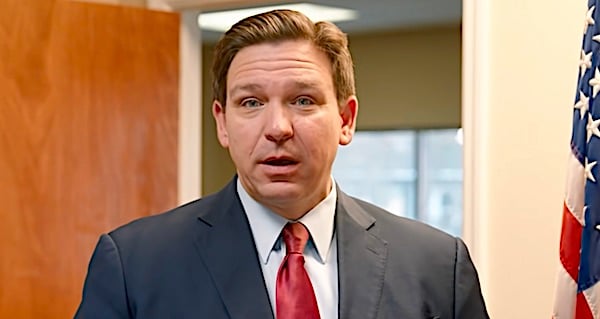 Democrats are demanding jail for Florida Gov. Ron DeSantis for his rhetorical suggestion that someone grab the "little elf," Anthony Fauci, and chuck him "across the Potomac."

Fauci is the medical adviser who flip-flopped constantly on COVID-19 measures, like masks and such. He did support the experimental shots and ways to force people to accept thosel products.

Further, he made out really good during the pandemic, with his net worth exploding by some $5 million that time.

It happened while he repeatedly downplayed the impact on children of the COVID-19 lockdowns, which he later admitted he knew would have "deleterious consequences" on children.

But he's now in the news, at RightJournalism, for the "threat" that came from DeSantis.

The Florida governor said that someone "needs to grab with little elf and chuck him across the Potomac."

“I’m just sick of seeing him … Someone needs to grab that little elf and chuck him across the Potomac!”

That's a threat, Democrats now allege, presumably because it is physically possible for someone to grab Fauci and throw him across the Potomac.

The report explained DeSantis made the comment at a Florida GOP event in Seminole County, and now Democrats are demanding prosecutors use it to jail the governor.

"According to Dash Dobrofsky, it is illegal to threaten a public official with violence. In fact, it is a federal crime that is punishable by up to 10 years in prison," the report said.

Governor Ron DeSantis spoke to a Florida crowd and yelled “somebody needs to grab” Dr. Anthony Fauci and “chuck him across the Potomac.” It is illegal to threaten a public official with violence. In fact, it is a federal crime that is punishable by up to 10 years in Prison.

The report continued that the demand also brought online trolling.

But DeSantis has been far from the only figure upset with Fauci, who has announced his coming retirement.

One member of Congress has compared him to a "snake oil salesman."

It's according to social media and a report in the Liberty Daily where Rep. Thomas Massie, R-Ky., sounded off on the bureaucrat who during the pandemic informed the American publice that HE was "the science."

A column at Liberty Daily charged he "is a conman at best and very likely complicit in the deaths of countless people."

"Call me a skeptic, but I take threats by most in the feckless GOP as nothing more than campaign promises. But there are a few who I believe truly will try to hold Fauci and others accountable if the Republican Party can retake control of the House and/or Senate following the midterm elections. One such lawmaker is Congressman Thomas Massie who laid out Fauci’s fraudulent actions in a Twitter thread," the column said.

Massie noted: "Science didn’t evolve, Fauci ignored science. He denied the existence of natural immunity. He spoke of droplets to avoid acknowledging the size of the virus was too small to be stopped by the filters of loose fitting cloth masks. The vaccine trials were designed NOT to show the vaccines didn’t prevent infection or spread, but he spoke as if they did. He ignored harm caused by locking down people – delayed cancer screenings, untreated diabetes, un-filled prescriptions, mental health (suicides), etc. He ignored and still ignores all side effects of the novel mRNA vaccines. The policies he advanced never properly acknowledged that the elderly had exponentially more risk than children. He cared not about the stunted social and educational development of children."

Massie continued, "He downplayed early treatments and promoted late stage expensive pharmaceuticals while ignoring their side effects. Fauci isn’t science, he’s a snake oil salesman trying to quietly ride his wagon out of town before the people hold him accountable for his fraud."

Some of Massie's comments:

He denied the existence of natural immunity.

He spoke of droplets to avoid acknowledging the size of the virus was too small to be stopped by the filters of loose fitting cloth masks.
(Thread, 1/4) https://t.co/vPTkLULpgg

He ignored and still ignores all side effects of the novel mRNA vaccines.

The policies he advanced never properly acknowledged that the elderly had exponentially more risk than children.

He cared not about the stunted social and educational development of children.
(3/4)