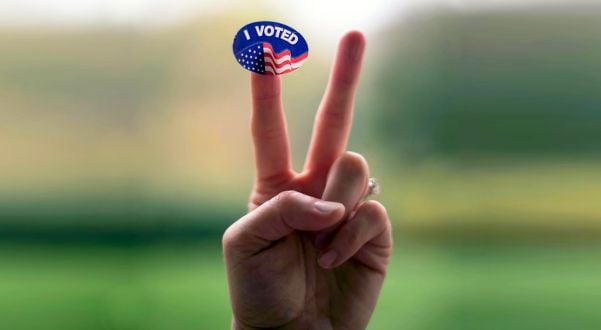 There were, during the 2020 presidential election, a number of anomalous behaviors by elections officials.

For example, they would would adopt ballot drop-box schemes even though they were illegal. There were strange provisions for voting in nursing homes, and by felons.

Suddenly, without legislatures acting, requirements for ballot signatures, witnesses and more were changed. Ballot harvesting showed up over and over.

All of those circumstances ended up with Joe Biden being declared the victor in the presidential race, and his ascension to the White House has delivered to the nation a southern border crisis that will cost billions, inflation of nearly 9%, gasoline costs of more than $6 a gallon, new threats from Russia and China, and an agenda that is trying to force abortion and transgenderism on everyone including those whose faith bans those behaviors.

But courts now are addressing some of those conflicts, just ahead of the 2022 midterms.

The Federalist confirmed that a judge in Wisconsin has smacked down an attempt by a "left-wing group to allow the counting of invalid absentee ballots."

The dispute originally had given to plaintiffs supported by Restoring Integrity and Trust the decision that local election officials were barred from filling in “missing address information from ballot certifications that must accompany mail-in ballots."

Were there anomalous behaviors by elections officials during the 2020 presidential election?
99% (129 Votes)
1% (1 Votes)

After all, state law states, "If a certificate is missing the address of a witness, the ballot may not be counted."

"This lawsuit was a desperate attempt by extreme leftwing groups to enable the counting of invalid ballots in the upcoming election," explained RITE President and CEO Derek Lyons in a statement. “RITE’s work to secure the correct outcome in this case is another in a string of victories for Wisconsin voters and for transparency, consistency, and integrity in elections across the state.”

It was an organization that was represented by "Russia collusion hoaxer" Marc Elias' law firm that wanted a ruling that the state law didn't apply to election ballots.

The Federalist explained, "A long-time left-wing activist, Elias has spent decades attempting to interfere in U.S. elections to benefit the Democrat Party. As detailed in her bestselling book, 'Rigged: How the Media, Big Tech, and the Democrats Seized Our Elections,' Federalist Editor-in-Chief Mollie Hemingway describes how Elias 'helped orchestrate the effort to change hundreds of election laws and processes in the months leading up to the 2020 election in order to flood elections with tens of millions of mail-in ballots.' These alterations were later exploited by left-wing groups funded by Meta CEO Mark Zuckerberg to 'run Democrat Get-Out-The-Vote operations from inside government election offices.'"

Another court ruling in Wisconsin determined that voters were not allowed to change their vote after submitting their ballot.

And Fox News revealed the U.S. Supreme court decided a decision from the 3rd U.S. Circuit Court of Appeals that said ballots with undated envelopes must be counted was moot. The state's prior laws on the issue were reinstated.

The dispute was over dates on mail-in ballots.

Fox pointed out, however, that just because there's a court ruling doesn't always mean the problem is solved.

It reported, "A top election official in Pennsylvania says the state will disregard the U.S. Supreme Court's guidance on counting mail-in ballots arriving in envelopes with typos or incorrect dates, saying that the state's Commonwealth Court has already established the practice as licit."

The report explained state election laws require voters to include a signature and date on the outside of return envelopes when voting by mail. But acting Secretary of State Leigh Chapman announced that Pennsylvania election officials should continue counting ballots that arrive with improperly filled-out envelopes, as a state court wanted.

"Every county is expected to include undated ballots in their official returns for the Nov. 8 election, consistent with the Department of State's guidance," Chapman wrote. "That guidance followed the most recent ruling of the Pennsylvania Commonwealth Court holding that both Pennsylvania and federal law prohibit excluding legal votes because the voter omitted an irrelevant date on the ballot return envelope."

Chapman said the Supreme Court's decision "does not affect the prior decision of the Commonwealth Court in any way."

In addition to the myriad state statute and rule variations that were enabled for 2020, WND also has reported on major influences.

In fact, experts say there are two that likely changed the winner from President Donald Trump to Joe Biden.

Those are that the FBI was accused of colluding with Big Tech to suppress accurate, but very damaging information, about the Biden family's international business deals.

Facebook's Zuckerberg admitted that he ordered that reporting suppressed.

House Minority Leader Kevin McCarthy didn't take long to conclude: "The FBI colluded with Big Tech to silence news stories weeks before the 2020 election in an attempt to control your access to information. Democrats in Congress have been intentionally ignoring the facts. When Republicans are back in charge, we will hold all of them accountable."

Then, of course, there was that $420 million that Zuckerberg used to influence the results.

That money was given over to a couple of foundations, which then distributed it mostly to leftist local elections officials to help them run their operations during the COVID-19 pandemic.

Much of that money ended up being used to recruit voters from Democrat districts, a move that would have heavily influenced the results of the election.