Last year, President Biden scolded the approximately 25% of Americans who decided not to get the experimental mRNA vaccine for a disease with a nearly 100% survivability rate for most people, charging they were responsible for a "pandemic of the unvaccinated."

Government data from around the world has countered the president's claim, and now the insurance giant Kaiser Permanente – which is also a health-care provider – has commissioned a study to evaluate the effectiveness of the mRNA vaccine against the dominant omicron subvariants.

A chart on page 30 of the preprint study shows vaccine efficacy against the omicron subvariants dropping significantly 14 to 30 days after a shot. The efficacy continues to fall in the following months then reaches negative territory after five months, meaning the recipient is more likely to get COVID than if he or she had not been vaccinated.

Further, the study indicates that those with three shots are at more at risk of COVID after five months than those who got two shots. 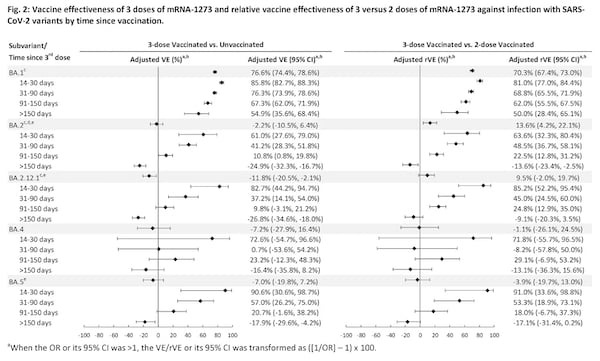 Horowitz noted the American Association of Physicians and Surgeons posted a Twitter thread with numerous recent studies that also show negative efficacy resulting from the shots.

This is the latest in a string of studies that report COVID vaccine effectiveness (VE) wanes into negative territory. Here are some of the others. 🧵 1/ https://t.co/7YP8Mc2cub

Horowitz, who has reported on the negative efficacy of the vaccine for the past year, said it appears that the shots "prime the body to respond to a version of the virus that has long since changed, thereby making the natural immune response misfire."

Supporters of continued COVID-19 vaccination, he noted, argue that this is the reason for the new bivalent shot for the BA.5 omicron variant that was approved after it was studied on eight mice and no humans.

But, already, a new variant is surging, making the new shot as irrelevant as the previous ones and likely counterproductive, Horowitz argues.

The CDC reports the new BA.4.6 variant now represents 13% of all COVID-19 cases and is rising sharply. Other variants are breaking out as well.

She wondered if the study came about because Kaiser was beginning to worry about the excess illness it was seeing.

"Kaiser might be willing to do a little truth-telling," she wrote, "as it tries to calculate who is going to pay for this unexpected hit, which presumably did not stop in 2021 but continues apace."

In Australia's state of Victoria – where about 95% of the state's adults have received COVID vaccines and most are boosted with mRNA shots – official government data shows deaths in August soared to the highest level in at least 13 years.

British government data indicates adults aged 40-74 who have received mRNA booster shots are twice as likely to be hospitalized as those who haven't recently been boosted.

In June, an analysis of Pfizer and Moderna COVID vaccine trials by British Medical Journal Editor Dr. Peter Doshi and other medical scientists found the mRNA shots are more likely to land a recipient in the hospital than to provide protection from a severe adverse event.

'Don't forget to get your booster'
Meanwhile, Biden's top health adviser, Dr. Anthony Fauci, was on CBS' "The Late Show with Stephen Colbert" last week promoting the new bivalent booster with the host.

The two taped a sketch airing Wednesday in which they left the studio and walked down the street to a pharmacy after Fauci said during an interview that he was eligible for another booster.

Fauci, after receiving four doses of the Pfizer vaccine, meaning he was "double boosted," tested positive for COVID-19 in June.

At a Walgreens store, Colbert joked with Fauci about various products on the shelves as they made their way to the pharmacy to get the shot.

"OK, now I know you want to convince people to go get this shot, right? It’s the cool thing to do. OK, what could be more compelling than getting the shot with a pair of sexy kitten ears on?" Colbert said as he pulled the item off the shelf in the Halloween section.

After Colbert's cajoling, Fauci, wearing the kitten ears, joined the comedian in looking into the camera and saying, "Don't forget to get your booster."

Dr. Fauci was eligible for his COVID booster shot so Stephen took him next door to the pharmacy to get vaccinated — and they had quite the journey. #Colbert pic.twitter.com/1GZo2u89RC

Late last month, a top London cardiologist who was one of the first to take the COVID-19 vaccine and promote it on British television called for a suspension of the shots, arguing in a scientific paper that there is evidence the risk of harm is greater than any benefit.