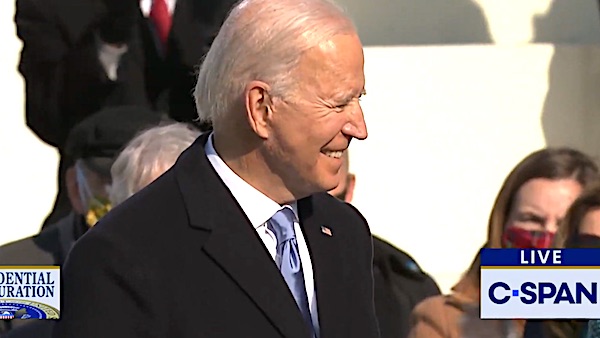 President Joe Biden smiles moments after taking the oath of office during his inauguration on Jan. 20, 2021. (Video screenshot)

In the wake of a report from a watchdog organization that said, in a 634-page report, it found evidence of 459 "legal violations" including tax fraud, falsifying business papers, prostitution and non-consensual pornography by Joe Biden's son, Hunter, the same group now has alleged Joe Biden was "complicit in six alleged white collar crimes."

The new claims from the watchdog organization Marco Polo were outlined by the Daily Mail, which cited the report's accusations that Joe Biden "is complicit in tax evasion, violated the Presidential Records Act, and used nonpublic information for financial gain in six incidents from June 2010 to December 2016."

The 634-page report from the nonprofit Marco Polo, a government transparency organization, was obtained exclusively by the Daily Mail, which noted earlier the accusations of 459 crimes by Hunter.

And Joe Biden "is listed as an 'accomplice' in" six situations, the report said.

The report followed a DailyMail.com report that a White House lawyer had sent Hunter and his business partner emails about then-Vice President Joe Biden's taxes in 2010, undermining Joe Biden's multiple claims that he had no financial link to his son or knowledge of Hunter's business operations.

The investigative work by Marco Polo hunted the emails, texts and pictures from the laptop computer Hunter Biden abandoned at a repair shop and Ziegler said it's a guide for law enforcement and congressional investigators for "what to subpoena" to do their own investigations.

The report already has been sent to all members of Congress.

A lawyer for Hunter Biden, Kevin Morris, described the report as a "package of libel."

But the report cites a May 2016 email from Joe Biden's adviser, John S. Flynn, regarding his schedule and a meeting with then-Ukrainian President Petro Poroshenko, to Joe Biden. It also was sent to Hunter Biden, who was on the board of the Ukrainian gas company Burisma at the time.

"Boss–8.45am prep for 9am call with Pres Poroshenko. Then we're off to Rhode Island," the email said.

Marco Polo charges that copying Hunter in the VP's schedule "constitutes a use of nonpublic information from a government job for financial gain, which allegedly violates section 2635 of the US Code of Federal Regulations."

By now few Americans are not aware of the Biden family's international business dealings.

There was that multi-million dollar payment from China, and another from Russia. And don't forget the millions from a Ukrainian gas company, one that was being investigated for corruption until Joe Biden, as vice president, put down his foot and threatened to withhold American money unless the prosecutor was fired.

The Daily Mail noted, "The Presidential Records Act requires the VP to turn over all official records including government-related communications to the National Archives and Records Administration for preservation. It is unclear whether that occurred with emails on Joe's private addresses."

The report also explains that it appears Joe Biden failed to declare to the IRS the apparent gift of having thousands of dollars of his personal bills paid by Hunter Biden's company. A June 2010 email from Hunter Biden's business partner in Rosemont Seneca listed more than $5,000 of bills including home maintenance. "Another email five days later shows money flowing between Hunter and Joe's accounts," the report said.

Hunter is already facing an FBI investigation over alleged money laundering, tax crimes and illegal foreign lobbying. And the Washington Post has reported agents believe they have enough evidence for Delaware prosecutor David Weiss to file charges against him.

It was reporting on Hunter Biden's laptop, by the New York Post, that triggered the FBI to warn Big Tech just days before the 2020 election of Russian "disinformation" coming about the Bidens.

Only the laptop details weren't disinformation at all, and the FBI's campaign to suppress the details is believed by many now to have taken the election away from President Trump and given it to Joe Biden.