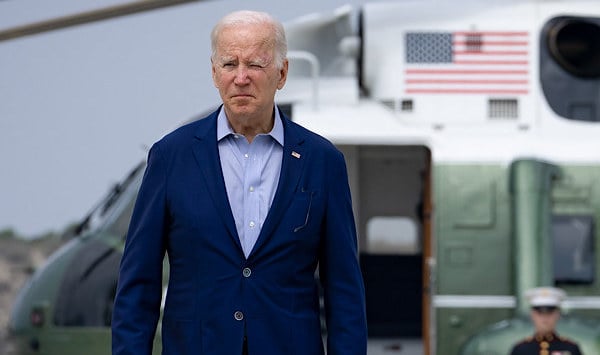 President Biden declared in a speech Wednesday it was a "myth" that his administration has slowed oil production or made it harder for energy companies to increase production.

That didn't sit well with former Keystone XL pipeline welder Neal Crabtree, who was among hundreds of workers laid off hours after the president canceled the federal permit for the pipeline on his first day in office, Jan. 20, 2021. The project would have transported 830,000 barrels of oil per day from Canada to Texas. In addition, on day one, Biden placed a temporary moratorium on oil and gas activity in the Arctic National Wildlife Refuge.

"I don't know how he gets away with keep saying that he doesn't have anything to do with [high gas prices] when they've got everything to do with it," Crabtree said in a Fox Business interview.

In remarks at the White House on Wednesday, Biden said: "Let's debunk some myths here. My administration has not stopped or slowed U.S. oil production. Quite the opposite."

Biden: "Let's debunk some myths: My administration has not stopped or slowed U.S. oil production."pic.twitter.com/XcocoplSO3

However, in his executive order canceling the pipeline permit, Biden said the U.S. would prioritize the "development of a clean energy economy" instead of oil and natural gas production.

During the Democratic presidential primary campaign, Biden vowed: "No more drilling on federal lands. No more drilling, including offshore. No ability for the oil industry to continue to drill. Period."

Biden, today: "My administration has not stopped or slowed oil production."

Biden, 2020: “No more drilling on federal lands. No more drilling, including offshore. No ability for the oil industry to continue to drill. Period.”pic.twitter.com/e1usgfbVEU

Clearly, Biden has recognized the U.S. has fallen short of its demand for oil.

Earlier this month, his administration turned to Venezuela for help after accusing OPEC+ of siding with Russia in its decision to make the largest cut in oil production, 2 million barrels a day, since the beginning of the COVID-19 pandemic.  Saudi Arabia, which rejected Biden's "fist bump diplomacy" request in June to boost oil production, said last week the Biden administration asked OPEC+ to delay the decision on oil output until after the midterm elections.

Crabtree told Fox Business that in his industry, man hours have been cut more than half.

"It's not just Keystone. Ever since day one — I can name you dozens of other pipelines that we were expecting to build here in the last couple of years, and they can't get the permits," he said.

Fox Business, citing the Energy Information Administration, reported that while oil production on leased federal lands and waters increased to 12 million barrels of oil per day last week, it remains more than a million barrels per day lower than its pre-pandemic level from March 2020.

Along with canceling oil lease sales, the Biden administration has introduced impediments to new pipeline construction.

And significantly, in keeping with its policy of rapidly transitioning to "renewable" energy and, the administration has supported financial disclosure rules requiring private sector companies to reveal "climate risk" data.

"It ain't just, you know, the canceling of pipelines. It's behind-the-scenes stuff – pressuring banks and lenders not to finance fossil fuel projects," Crabtree told Fox Business. "But the main problem that our industry is having is they've got such a stranglehold on the permit process."

"I don't know how bad they want the country to suffer before they realize that you can't force everybody to go on green energy," he said.

Two months after taking office, in March 2021, the Biden EPA withdrew a key permit for an oil refinery on the island of St. Croix, citing "environmental justice' concerns

Biden's effort to lower gasoline prices has centered on releasing oil from the U.S. Strategic Petroleum Reserve. On Wednesday, he announced the release of another 15 million barrels. Already, more than a quarter of the stock has been released, draining the reserves to the lowest level since 1984.

"There is no shortage of opportunity or incentive for oil companies to ramp up production," she said. "This is something that they can actually do. It is available to them. They can do this, and also they are getting the profits."

The IPAA explains that about 25% of the leases are embroiled in a "complex regulatory process or are held up in litigation."

And there are economic factors that cause oil companies to delay use of the permits, related to the cost of drilling and the price of oil. Supply chain problems and staffing shortages also have caused delays, with some companies waiting six months for key materials.

See the exchange at the White House: