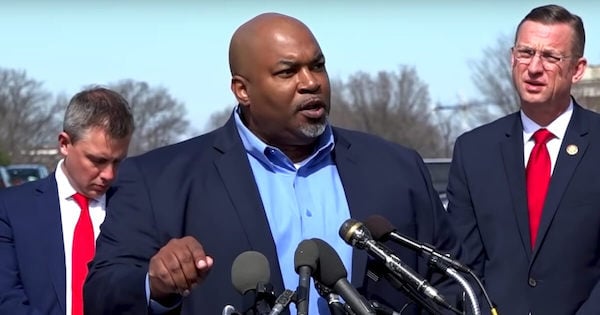 Less than five years ago, Mark Robinson was working at a furniture factory when he decided to make his views on gun control heard at a meeting of the Greensboro City Council in North Carolina.

His passionate speech went viral on Facebook, and he's now the state's first black lieutenant governor, with an eye on running for North Carolina's top office in 2024.

In a video interview with WND (embedded below), Robinson discusses his American dream story, which he chronicles in his newly published autobiography, "We are the Majority!" 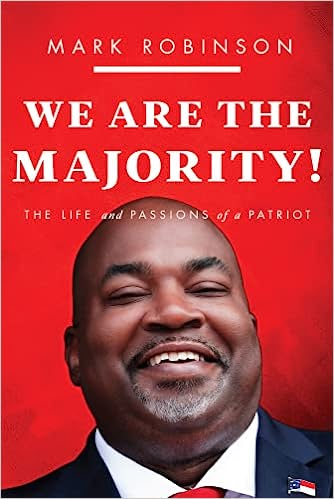 He recounts growing up "dirt poor," the ninth of 10 children, in a rat-infested home with an alcoholic father who beat his mother. But he believes he learned more than he ever could have by growing up in a big house, attending a private school or traveling the world.

"Character gets built on struggles," he told WND. "When you have to face situations where you don't have enough to eat, when your family has reached the last of the last. Those are the things that are either going to make you or break you."

Robinson said he begins his public talks thanking "his Lord and savior Jesus Christ" because he's not a perfect man and owes everything good in his life to God.

"When I was a little kid, going through those tough times in that little red house on Logan Street, God was right there with me," he said.

"My mom saw to that – my mom was a prayerful woman."

Now that he's become one of the state's top officials, he's "not going to stop thanking God."

Robinson, a strong pro-life advocate, has acknowledged that as a young man, he urged his girlfriend, who later became his wife, to get an abortion.

Addressing the accusations of "hypocrisy," he said he and his wife, Yolanda, want to share their story to help others avoid what they went through.

Lt. Gov. Mark Robinson's "We are the Majority!" is available at the WND Superstore

'A heartbeat away'
WRAL, the NBC affiliate in Raleigh, published a feature last month on Robinson, based on interviews, titled "The enigma of Mark Robinson: How NC's outspoken lieutenant governor is climbing the GOP ladder."

The news station said the "once-frightened child from Greensboro," who is "a heartbeat away from running the state," has become "one of the most animating and divisive figures in North Carolina politics, with a view of fairness that makes others fearful of how he'd act as governor if elevated to the office or if he's elected in 2024." The chief "fears," WRAL said, are his advocacy for "tighter abortion restrictions, looser gun control and stricter immigration measures."

He stands by bold statements he's made on his personal Facebook page and in churches condemning same-sex marriage, homosexuality, transgender activism and other moral issues.

Robinson said he wants people to understand that "as an individual in this nation, you have the right to express your opinion." However, when it comes to governing, his opinions must never violate someone's constitutional rights.

There is one social media statement he wishes he "would have worded differently," a comment on blacks making a big deal about the movie "Black Panther" that brought charges of anti-Semitism. In the book, he noted that he was paraphrasing a joke by filmmaker Mel Brooks, and he wished he would have just quoted Brooks directly.

Breaking from the Democrats
Because of the far-left ideology taking over the Democratic Party, he said, "we're seeing a break for many black people in this country from that party."

"Many, many black people across this country are starting to take a look and say, 'Hey, what is this party doing?' And more importantly, 'What have they done for our communities? If they're really working hard for our communities, why have our communities been plunged into poverty for all these decades with no change?'"

Many blacks have become independents, he said, "and many, quite frankly, are leaving and becoming Republicans."

'We were victorious over slavery'
Robinson told WND he believes America's schools should not shy away from telling the full story of the "terrible institution" of slavery, noting there is an ongoing fight against bigotry.

"But at the end of the day, we need to tell that story not as victims, but as victors," he said. "Why? Because we were victorious over slavery. We defeated it in the Civil War. We ended it with our Constitution, and we continued to struggle against the tenets of that slavery and that racism throughout Jim Crow, and we ultimately defeated that as well."

Asked about a possible run for governor in 2024, Robinson noted that there won't be an incumbent running for the office, and he has been preparing for the possibility, learning as much as he can as he serves as the No. 2 to North Carolina Democratic Gov. Roy Cooper.

"If the people of North Carolina would have me, this is definitely something that we are taking a look at," he said.

See Robinson's remarks to the Greensboro City Council in April 2018:

On the road with Lt. Gov. Mark Robinson singing Johnny Cash, “I’ve Been Everywhere.” He nails it! pic.twitter.com/sBlIRXzHws