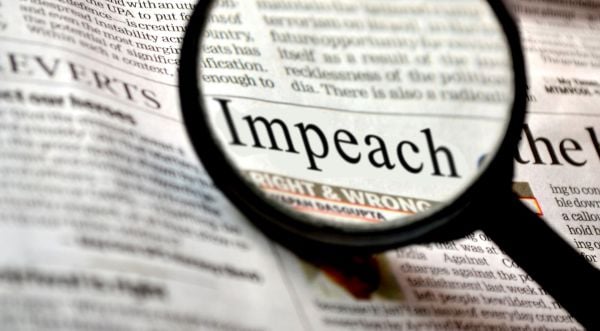 Democrats as a political party were enraged when the 2016 presidential election put Donald Trump in the White House. After all, their candidate, Hillary Clinton, had been eyeing that post for probably years. Their perspective was that she deserved it.

Hundreds of times officials all up and down the party's hierarchy insisted to anyone who would listen the election was stolen, that Trump wasn't a "legitimate" president.

So in addition to undermining his first term with the now-debunked Russiagate collusion conspiracy theory, they took a complaint from a mid-level federal employee about President Trump's phone call with Ukraine's president and created their first, failed impeach-and-remove scheme.

Then came the Jan. 6, 2021, riot and they didn't even bother with evidence or testimony; they just launched their second, failed, impeach-and-remove attempt.

Some observers even say Nancy Pelosi's Jan. 6 committee is their third strike at the same goal – preventing him from running for office again, or being elected.

But a report in the Daily Mail reports that Rep. Kevin McCarthy, likely to be House speaker should the GOP be the majority in the House after next month's elections as expected, doesn't want to go down the same political path.

The report noted that there are some Republicans, in fact, "out for blood," and would welcome revenge through an impeachment of Biden or his team members.

But McCarthy told Punchbowl News Americans don't like the process being used "for political purposes."

He explained the GOP needs to show it is at a level of integrity higher than Pelosi and Chuck Schumer and not use the same box of political tricks they did.

The Daily Mail explained, "Department of Homeland Security (DHS) Secretary Alejandro Mayorkas and Attorney General Merrick Garland are the top two names that have been floated by some House Republicans as potential targets should the lower chamber turn red. Some Republicans have even floated impeaching President Joe Biden, who turns 80 next month, by calling into question his physical and mental fitness to serve."

However, the concept of Kamala Harris as president, following a Biden impeachment, likely will protect the soon-to-be octogenarian.

McCarthy, asked if anyone within the administration has engaged in conduct that would cause him to consider impeachment, said: 'I don't see it before me right now.'

"'You watch what the Democrats did – they all came out and said they would impeach before Trump was ever sworn in," the California Republican congressman said. "There wasn't a purpose for it."

The report noted, "While McCarthy says he is against 'impeachment for political purposes', that still leaves wiggle room for taking that action in instances he claims are not politically motivated. Calls for Mayorkas' impeachment are by far the most popular among border hawk Republicans."

Arizona Rep. Andy Biggs has noted, "DHS Secretary Alejandro Mayorkas has no integrity and should have already resigned from public office."