Protesting the advertising of a "family friendly drag show" on the website of her child's school, a livid San Diego-area mother asked the school board if they might be willing to promote a strip show or a "Fifty Shades of Gray" read-aloud as long as it’s labeled "family friendly."

The mother, Brittany Mayer, is among the many "mama bears" across the nation who have confronted school officials for adopting cultural and political agendas they believe are harmful to their children. But this mother's innovative argument before the Encinitas Union School District board Tuesday has caught fire on social media.

Mayer, who has a following on Twitter under the account Rooted Wings,  told the board she "wanted to know just what it is that makes a drag show family friendly."

She reasoned that the "family friendly" label can be slapped on anything, including gentlemen's clubs, strip shows, "Fifty Shades of Grey" read-alouds and an event featuring "all the sex secrets of Kama Sutra for kids and families."

To make her point, Mayer then described, using graphic terms, exactly what goes on at a drag shows where children are present, as documented countless times with video posted on social media platforms.

"My question, what is it about a grown man – and I honestly, sincerely as a woman mean this – what is it about a grown man, costumed in a sparkly bra with augmented boobs busting out, a leather mini-skirt barely covering his twerking ass, with tuck tape on his front while spreading his fishneted legs as he writhes on the ground, grinding his groin next to a minor (that is appropriate for children)?" Mayer asked.

"Family friendly," she said, using air quotes. "You owe us an answer." 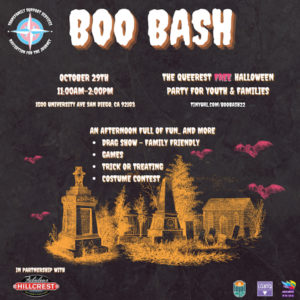 The parents, reported San Diego NBC affiliate KNSD-TV, were protesting the promotion of an event billed as the "queerest free Halloween party for youth and families" on the district's digital hub, called PeachJar. The director of the event's host, TransFamily Support Services, said the advertisement, featuring a "family friendly drag show," would not have appeared on the PeachJar platform without the district’s permission.

The district said in a statement Tuesday that the ad was removed from PeachJar three weeks ago because it did not meet criteria.

But Mayer, in her remarks to the board, insisted that simply removing the ad wasn't good enough.

"You owe an explanation and an apology," she said.

That effectively makes the board a "groomer," she said.

"You all played the activist pimp," the mother continued, noting that among the sponsors of the Halloween event are a transgender surgery center and a gay nightclub.

"You should all be ashamed," Mayer told the board, adding "there is nothing loving" or inclusive about activities that lead to "diabolical evil."

"There are boundaries," she concluded, "and you don't slap family friendly titles on stuff to cover your ass."

This is how you oppose radical gender theory and "family-friendly drag shows" in schools.pic.twitter.com/MJKfj9mAzz

Among the "family friendly drag shows" the mother may have had in mind was one that took place recently in Waco, Texas:

This is from a “family friendly” drag show this weekend in Waco, Texas pic.twitter.com/9c4sTVuT1P