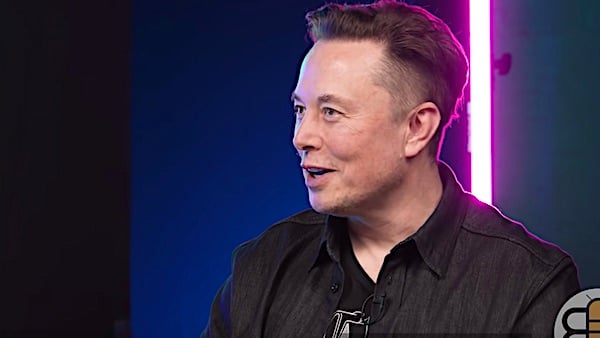 With reports that Twitter shares are being suspended on the New York Stock Exchange as the purchase by billionaire Elon Musk approaches finalization, the deal appears – finally – to be going through.

It's been months of arguments back and forth over the company, Musk's offer, the company's reporting on the number of "bots" online and more that has left the status uncertain.

But now, Musk is confirming he'll meet a Friday deadline, set by a court, to close the $44 billion deal, and he's even visited company headquarters in San Francisco.

Reuters reported that equity investors, including Sequoia Capital, Binance, Qatar Investment Authority and others, had received the requisite paperwork for the financing commitment from Musk's lawyers.

While Musk has stated his commitment to restoring free speech to the platform – after it for years censored conservatives and Republicans – he said it cannot be a "free-for-all hellscape, where anything could be said without consequence."

Of course the United States already has a fairly clear set of precedents for libel, defamation and the like.

The Daily Mail said Musk also warned advertisers that there must be valuable content.

"Our platform must be warm and welcoming to all," he said, on social media, "where you can choose your desired experience according to your preferences, just as you can choose, for example, to see movies or play video games ranging from all ages to mature."

He said he's confident "advertising... can delight, entertain and inform you," and it can "show you a service or product or medical treatment that you never knew existed, but is right for you."

He said the requirement for that is that advertising be "as relevant as possible" to the needs of platform users.

He said much of what has been speculated about his purchase "is wrong."

The Daily Mail explained he said that's "because it is important to the future of civilization to have a common digital town square, where a wide range of beliefs can be debated in a healthy manner, without resorting to violence."

Too much "traditional media" is extreme, and has lost the opportunity for dialogue.

The company's employees remained on edge, based on his earlier comments about eliminating many of the thousands of positions it funds. He specifically suggested low-performing workers needn't be on the payroll.

He also said moderation standards have been wrong, because they infringe on free speech.