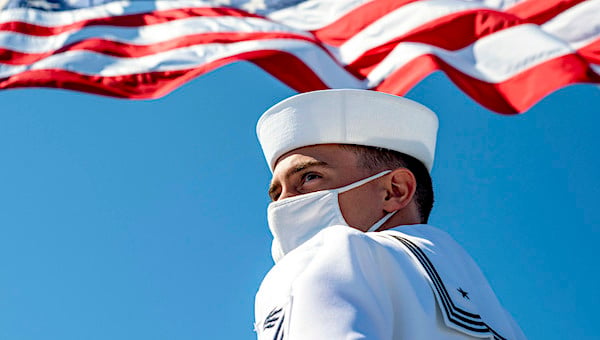 An officer has abruptly censored a midshipman's questions about the Navy's COVID vax mandate, experimental shots that have been documented to injure and even kill people.

The scene was caught on video and posted online:

“Getting the Covid Vaccine would not be living honorably. The Academy has attempted to strong arm us into either getting the Vaccine or DORing [voluntary resignation]" pic.twitter.com/RTDsIkANk8

According to a transcription of the comments posted online at YourNews, the event was at the U.S. Naval Academy in Annapolis, Maryland.

The midshipman explains, during a time that apparently was set up for members of the academy to ask questions of officers, "Sir, through many of the definitions we voted on for what it means to live honorably we talked about how to live honorably is different for every person based on their own moral code."

Then he gets to the problem.

Are the opinions of military members regarding the COVID vaccine being suppressed?
99% (991 Votes)
1% (6 Votes)

"For nine shipmen here, myself included, getting the COVID vaccine would not be living honorably. Even so, the academy has been attempting to (strongarm us) … if we are getting the vaccine or…"

But his questions a dead end.

The ranking officer, on stage, with his own microphone, orders: "OK stop! Stop! Go ahead and stop right there!"

The officer claims he's "not" cutting the midshipman off "because I don't want to answer you."

The posting explained, "The tense moment is illustrative of the Navy’s unwillingness to allow dissent when it comes to the COVID vaccine, as they’re still mandated by the U.S. government for Navy servicemembers. The incredible exchange comes as 26 Navy SEALs, five Navy Special Warfare crewmen and three divers are still embroiled in a legal battle with the Biden administration over their refusal of the COVID jabs on religious grounds."

In fact, multiple studies by now have documented the threat that some of the COVID shots post to children, young people and seniors.

Some nations in Europe already have banned the shots for certain age groups.

Online commenters were brutal. One stated, "What he meant to say was 'It wouldn't be fun for me to have to explain to 4,000 people why we failed as leaders.'"

Another said, "Let him speak! I'd like to hear the answer to that question too."

And a third: "The kid was right. His superiors have acted without honor this whole time. They could learn some from him."

Yet another pointed out, "Myocarditis is not a minor illness."