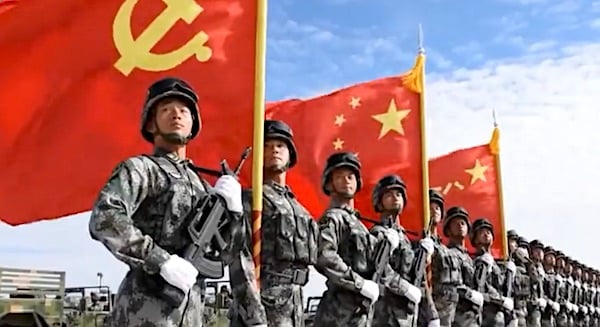 The Biden Cabinet's connections to the Chinese government go deeper than the deal Joe Biden's family made with a Communist Party energy firm that is at the center of the regime's effort to spread its influence around the world, contends former secretary of state Mike Pompeo.

Along with "the president of the United States and his family" are "members of the Biden administration’s Cabinet who worked on behalf of the Chinese Communist Party," he said in an interview on the Fox News Channel's "Sunday Morning Futures" with Maria Bartiromo.

"They had clients in China, deeply connected. I think we're only beginning to pull the threads," said Pompeo, who served as secretary of state under President Trump.

"And if you don't have actors who are putting the American people first – if there are other things, personal family interests or former business interests or friends that are still out doing that kind of peddling – it creates an enormous national security risk," he said.

"We need presidents, leaders at every level across the country focused singularly on representing the people they have been elected to serve."

As the CCP prepared to anoint President Xi Jinping as "leader for life," making him the most powerful leader since Mao Zedong, Pompeo acknowledged that the Chinese Communist Party's objective is to overtake the United States as a military and economic power.

The party's congress in Beijing, he said, "will put a lie to any doubt about the Chinese objective."

Evidence from Hunter Biden's abandoned laptop and from former business partner Tony Bobulinski indicated Joe Biden was involved in the deal Hunter Biden's firm made with the Communist Party-controlled CEFC China Energy, whose chairman at the time was billionaire Ye Jianming.

Biden Cabinet members' ties to China were addressed by Ben Weingarten, a Claremont Institute fellow, in an opinion piece for Newsweek.

Secretary of State Tony Blinken, for example, co-founded a consultancy that helps corporations and academic institutions pursue their interests in China. CIA Director William Burns ran the Carnegie Endowment for International Peace, which received as much as $2 million from Chinese Community Party-tied businessmen and think tanks. United Nations Ambassador Linda Thomas-Greenfield spoke favorably of China during a paid speech at Savannah State University delivered to one of the Confucius Institutes, a public educational and cultural promotion program run by the Chinese Communist Party. "Asia Czar" Kurt Campbell was board vice chairman of the U.S.-China Strong Foundation, which is linked to the CCP.

'They infiltrated our research institutions'
In a Fox News interview in February, Pompeo urged the Biden administration to emulate Trump's approach to China and confront Beijing "head-on."

"For 50 years, the United States allowed the Chinese Communist Party to walk all over us, destroyed millions of jobs here, they stole intellectual property," he said. "They infiltrated our research institutions. All of this was, frankly, under Republican and Democratic presidents alike."

But the Trump administration was different, he said.

"When they were spying on us from a consulate in Houston, we closed it. When they were engaging in trade practices that were unfair, we put tariffs on them," said Pompeo. "Every place in our livelihoods, our administration took it on. That's what they need to do."