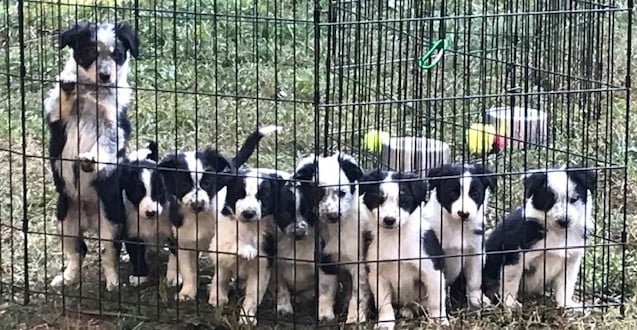 A close friend of ours raises border collies. The dogs are beautiful, brilliant and actually smile. Part of the name of their venture is "The Home of the Smiling Smart Dogs." They do Frisbee, tennis ball, agility and use the dogs to help herd chickens when they escape the coup. The dogs are amazingly fast, agile and yet gentle.

Recently, they had two liters of puppies. I decided to ask the owner some questions. The conversation went as follows:

I asked, "Are puppies binary?" The owner looked at me a little strange, so I changed my question to, "Can you tell me how these puppies happened?" He still looked at me a little strange and said, "Well, we start with a dam and a sire, where the dam is the female and the sire is the male." My mind immediately began to work, and I asked, "Wait a minute. You don't use two sires?" He looked at me and said, "Of course not." Then I said, "Wait a minute, surely you can use two dams." My friend's face reddened and he said, "That is not how it works. You have to have a pink one and a blue one."

I inquired, "Well, do they have different roles?" He said, "Of course. The dam takes care of the puppies and feeds them. This is an extremely important task, because without that care, the puppies will die. They experience the love of the mother dog, which sets up a lot of the character of the dog as it grows. In addition, the milk of a healthy mother is the absolute best nutrition the puppy can have and gives the puppy all kinds of immunities."

"Wow," I said. "That almost sounds like the design of the way something was intended to be." The owner said, "It certainly is."

Then I asked, "Well, what does the sire do? Is his job finished?" The owner said, "Just watch." The dams were feeding the pups, and the sire was just kind of walking around – but then all of a sudden some of the other dogs came over to where the puppies were feeding, and the sire immediately ran over and herded the other dogs away from the dams. With one dog in particular the sire stood him down, until the other dog began to act very submissive and leave. So I said, "So the sire protects the puppies and the dam." The owner said, "That's right. It is just something that is inside of them, as part of their design."

As I watched further, the sire lay down, and one of the puppies playfully walked over and began jumping at the sire's tail, as the sire moved it back and forth. Another puppy approached the sire's head with the sire gently touching the puppy with his paw. I said, "It looks like the sire is playing with the puppy!" The owner said, "He is, and not only that, but the puppies learn from the older dogs." The owner continued, "It took me four months to train my first dog in agility. 'Jump' took about a month, 'tunnel' about 15 seconds (he loved it), 'hoop' took a couple of weeks, but 'weave poles' took about two to three months; however, now he does the entire agility track in about 15 seconds. What was funny is that his great nephew watched the routine … one time … and then just did it. It was amazing," he said, laughing.

Then I asked, "When people call to obtain a puppy, what do they ask?" He said, "Well, they begin with 'do you have any left?' Then they ask, 'do you have any males, or do you have any females?'" I said, "Wait a minute. Surely you are gender-affirming. Don't you allow the puppies to decide their gender?" The owner looked at me again a little odd, and said, "Do you remember where we started? You have to have a blue one and a pink one. You have to have a dam and a sire, and you end up with males and females, just like the parents from which they came."

Then he said, "Come here let me show you something," and he proceed to pick two puppies. He showed me that they were different, and you could actually see a difference. Then the obvious question arose, "Well, what if someone calls for a female and all you have are males left? What do you do? Can you do some trimming or perhaps have medications to take care of that?" My friend's face contorted. He said, "That would be called maiming an animal, and it would be inhumane. In addition, animal rights activists would be all over someone who would do something like that – as they should be. Also, the SPCA (The Society for the Prevention of Cruelty to Animals) would come and take all of our dogs from us, charge us with a crime and probably send us to prison for purposely maiming an animal."

I responded, "Wow! So what do you do if you only have males and someone wants a female?" The owner said, "We try to direct them to someone else who has puppies, or we tell them they will have to wait until a future litter – for there are only males and females, and you cannot change one into the other."

So, I had a very informative interaction with my friend at the farm, and I learned that puppies … are binary!

Richard Blakley is a Ph.D. Inorganic Chemist and an ordained minister of the Gospel of Jesus Christ. While working in industry and serving as a university adjunct, Dr. Blakley also has spent 30 years studying the King James Bible using concordances linking to the original Greek and Hebrew. He also has a radio ministry, television ministry, campground ministry and retirement home ministry in which he and his wife of 38 years and his three lovely daughters all serve together. Since 2016 Blakley has added politics to his attention in an effort to help our country and preserve our Republic.