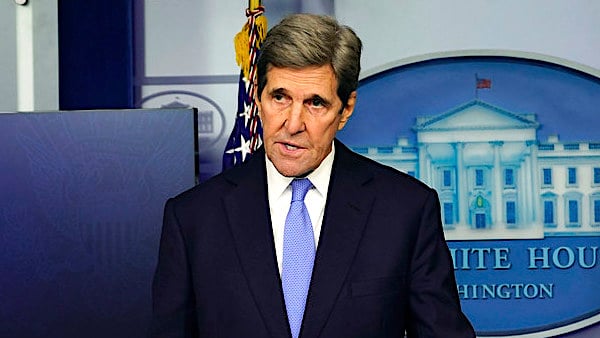 A new report has charged that failed Democratic presidential nominee (from 2004) John Kerry might be ready to leave the special envoy job Joe Biden gave him to work on climate change, on order to avoid butting heads with what is expected to be a GOP-majority House next year.

But he says that's just not so.

It was a Fox News that cited a report from Axios that Kerry was planning to leave Biden's administration.

"Citing anonymous sources," the report said Kerry was "actively considering leaving the Biden administration after next month's COP27 summit." He reportedly was soliciting suggestions from advisers on how to continue his climate activism without being in a federal post.

He's generated controversy for his insistence on viewing everything through the lens of a climate change activist, even while traveling the globe to accept climate change honors on a private jet.

"I can't stress enough: Secretary Kerry has no plans to depart, and his sole focus is COP27, period, and anything else is baseless speculation," communications director Whitney Smith.

The COP27, the 2022 United Nations Climate Change Conference, is meeting later this year in Egypt.

According to the Washington Examiner, if the GOP is the House majority after November's elections, it "could pose new challenges" for Kerry.

"He faces the prospect of Republican-led inquiries in Congress if the party wins control in the midterm elections and scrutiny from climate activists frustrated by the scope of his progress," the report said.

Biden gave him the federal post when he took office with orders to push the world toward Biden's climate goals.

The report continued, "But Kerry has drawn scrutiny across the political aisle over his approach. He argued this week that the United States is not 'obstructing' climate compensation talks urged by poorer countries and has defended working with China."