A member of Congress, U.S. Rep. Marjorie Taylor Greene, R-Ga., has reported her sixth "swatting" attack on her home in recent weeks.

That's when someone calls police and falsely claims that there is some sort of extreme criminal activity going on there, such as a shooting, a hostage situation and the like.

Now, the National Review said the most recent incident, this week, sent police officers to her home after they got "a prank call claiming there was an emergency" there.

Her team confirmed it as the sixth such episode.

"The police department in Rome, Ga. said they are referring all inquiries regarding Greene to the FBI. The FBI did not immediately respond to request for comment," the report explained. 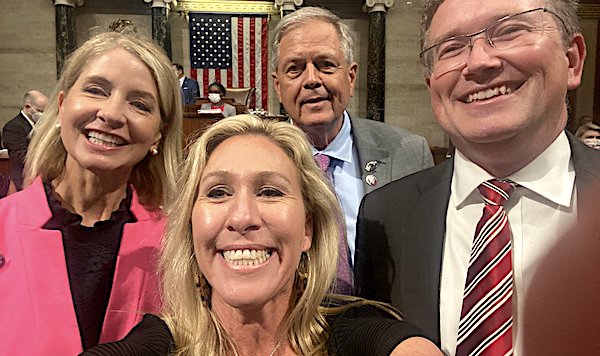 Greene, on social media, said, "I was swatted for the 6th time last night. Swatting is a very serious crime. The caller wants to have their victim murdered by police. But it is also a giant abuse of police resources and time, which is another reason it is a serious crime. God bless my local police."

The series of attacks on the sitting member of Congress began back in August, when there were calls to police two nights in a row that falsely claimed emergencies at her home.

The report said detectives from the local police department are working with Capitol Police investigating the assaults.

WND reported when the attacks were developing that Greene was alarmed by the agenda.

"Absolutely, 100%, they wanted me to be murdered, death by cop. That's what swatting is. And they were doing this in hopes that the police would kill me,” Greene said in an interview about the event on Right Side Broadcasting Network.

That was when, for two straight nights, police were sent to her home in Rome on false calls suggesting that there was a killer there and people inside were dead.

At the time, information obtained by police suggested the callers were apparently incensed over the Republican lawmaker’s efforts to stop sex-modifying surgery on transgender minors.