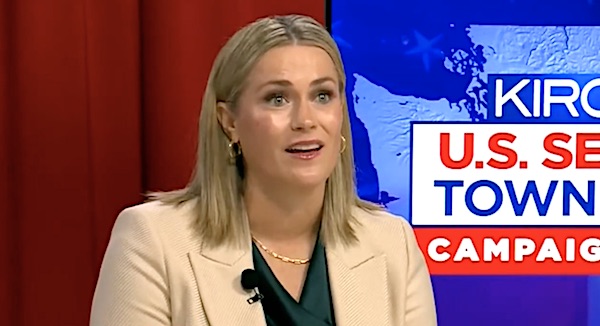 Democratic Sen. Patti Murray is now tied with her Republican challenger and nurse Tiffany Smiley in the Washington Senate race, according to the results of a new survey published on Sunday.

The survey showed that Murray and Smiley each had the support of 46% of respondents, a two percentage point shift in favor of Smiley from the same poll conducted in September, according to pollster Moore Information Group. It also showed a three percentage point decrease in Murray’s net favorability ratings, while Smiley’s net favorability increased by the same amount.

The leveling of both candidates in the polls one week before Election Day heralds a potentially dramatic upset for Smiley, a nurse with no prior political experience, against Murray, who has represented Washington state in the Senate since 1993 and is running for a sixth term. In 2016 Murray won by double-digits in the state, which has a Cook Partisan Voting Index score of D+8, in favor of Democrats.

Despite the best efforts of our teachers during the pandemic, distance & remote learning has shown all of us the holes in our education system.

For much of the electoral cycle, Murray led Smiley by such a margin until this week, where multiple polls have shown a narrowing gap. On Sunday, RealClearPolitics re-designated the race as a “Toss Up” from being “Likely Democratic.”

Smiley’s campaign has focused much of its messaging on Murray’s long incumbency and record in the Senate, blaming her for high inflation and alleged foreign policy missteps under the Biden administration. Murray has voted with President Joe Biden’s stated positions on issues before the Senate 96% of the time, according to FiveThirtyEight.

Smiley has also adopted positions taken by Republicans nationwide this midterm election, including expanding school choice programs as well as promoting “curriculum transparency” in relation to content regarding race, gender and sexuality. She has also proposed to make cities that defund their police departments legally liable for increased crime.

Crime, in particular, has been a high-profile issue in Seattle, the state’s largest city, where drug use and homelessness have increased, and where left-wing activists occupied a section of the city’s downtown corridor (termed the “Capitol Hill Autonomous Zone”) for several weeks in 2020. Seattle cut its policing budget by 17% in 2020, resulting in the departures of 400 officers while crime has reached a 30-year high, per the Seattle Times.

The Murray poll surveyed 500 likely voters in Washington state between Oct. 20 and 22 and had a margin of error of 4%. Murray and Smiley’s campaigns did not immediately respond to a request for comment.