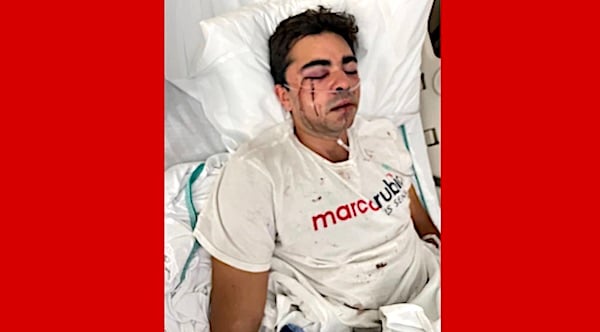 A canvasser for U.S. Sen. Marco Rubio, R-Fla., is beaten and bloodied by political opponents in Florida in October 2022. (Courtesy Marco Rubio / Twitter)

A campaign canvasser for U.S. Sen. Marco Rubio, R-Fla., was left with a broken jaw, internal bleeding, needing surgery and a message: Republicans 'aren't allowed in their neighborhood," according to a report from the senator.

Rubio, a sitting senator, is running for re-election in a race that has Rep. Val Demings as the Democrat Party challenger.

One social media, Rubio revealed that one of his campaign volunteers was beaten, requiring medical attention.

A report at the Daily Mail explained the volunteer was wearing Rubio campaign gear and that of Florida Gov. Ron DeSantis.

Both are popular among vast swaths of conservative Americans, and DeSantis even has been speculated as a possible GOP nominee for president.

Rubio, in his statement, explained, "Last night one of our canvassers wearing my T-shirt and a DeSantis hat was brutally attacked by 4 animals who told him Republicans weren’t allowed in their neighborhood."

The volunteer, whose name was not released, sustained internal bleeding and a broken jaw and now will need facial reconstructive surgery, Rubio explained.

Should the Biden Justice Department investigate this attack as 'election interference'?
99% (1376 Votes)
1% (10 Votes)

The report said the level of involvement by law enforcement remained unclear.

It reportedly occurred in the city of Hialeah, which is located in Miami-Dade County, the report said.

The attack comes amid a largely verbal but very intense campaign by Democrats in Washington, including in the White House, to mischaracterize Republicans as a threat to the nation.

And he "recently derided them as 'mega MAGA Republicans' in a Sunday interview on MSNBC and has panned them as 'extremists' in appearances across the country alongside Democratic midterm candidates."

The Republican National Committee's response to Biden was, "Joe Biden's wretched attacks on millions of Americans have fueled attacks on pregnancy centers, Republican offices, and an assassination attempt on a Supreme Court Justice."