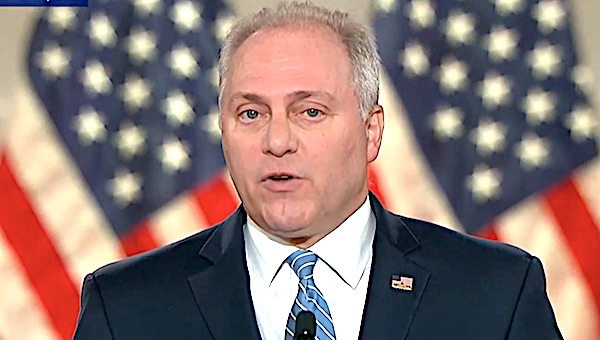 Rep. Steve Scalise, from Louisiana's First District and the House Whip for the Republican Party, says the GOP is ready and waiting to "clean up the mess Biden and Pelosi have made."

"Bit government socialism has been an absolute disaster for this country," he said, in a commentary posted at Daily Caller News Foundation.

"Are you and your family better off than you were two years ago?" he asks. "Under two years of Democrats’ control of Washington, inflation is surging, energy prices are through the roof, crime is out of control and a record number of illegal immigrants have flooded across our open southern border, bringing fentanyl and other drugs that killed more than 100,000 young Americans last year."

He continued, "We deserve better than this far-left socialism. Everything costs more because of Biden and Pelosi’s rampant spending – from the food you buy at the grocery store to the gas you pay for at the pump. Compared to last year, gas prices rose 18.2% and groceries prices increased by 13%."

The midterm elections are just weeks away and analysts expect the GOP will regain the majority in the House, which the Democrats have held by only a handful of seats over the last two years. The 50-50 Senate is run by Democrats now only because of Kamala Harris' ability to cast tie-breaking votes, and there are predictions the GOP might regain the majority there too.

Under Joe Biden's administration, in fact, his open borders policy has allowed millions of illegal aliens to flood the nation's resources, inflation is well above 8% officially and food and fuel are much higher, there's been the horrific withdrawal from Afghanistan, new threats from China and Russia, and an agenda that appears dedicated to pushing abortion and transgenderism on everyone in America.

He cited Democrats' failures, including their decision to label law enforcement officers as racists and promote the radical "Defund the Police" movement and other "soft-on-crime" practices that have allowed criminal activity to explode.

"In addition to the lawlessness we’re seeing in Democrat-run cities, we’re also seeing the damage done by the Biden administration’s open-door immigration policies," he said. "Let’s be clear: Border security is national security."

He added, "Every town is now a border town because Democrats have surrendered control of our southern border to illegal immigrants and drug cartels."

The result is that fentanyl is flooding into the country and killing Americans "at an unprecedented rate."

"We’ll secure the border and stop the illicit flow of drugs that are poisoning our kids and our communities," he said.