More than half a century ago, Planned Parenthood produced a memo that compiled strategies for population control that were being proposed at the time, including "restructuring the family," encouraging homosexuality, tax-funded abortion and sterilization.

Called the "Jaffe memo," it was authored by Fredrick S. Jaffe, a vice president of the Planned Parenthood Federation of America who founded the pro-abortion organization now known as the Guttmacher Institute.

A table in the memo summarizing the population control ideas was spotlighted this week by journalist Matt Walsh, who pointed out that nearly all of the proposals have been implemented 50 years later.

See the table from the "Jaffe memo" here and an image of it below: 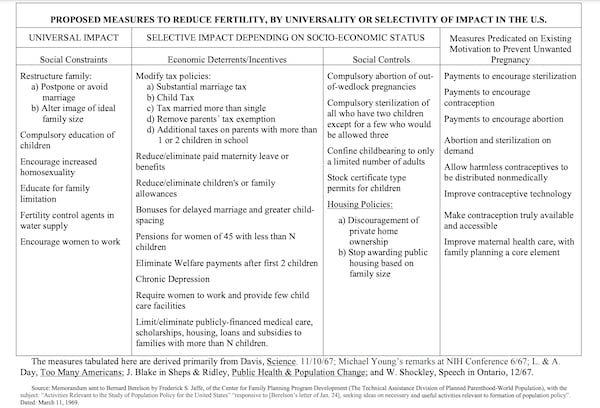 The memo was the subject of a 1973 Senate hearing chaired by Republican Sen. Alan Cranston.

Jaffe insisted in a letter to Cranston that the listing of the ideas did not equate to endorsement by Planned Parenthood.

He said "the memorandum makes clear that neither I nor the Planned Parenthood Federation of America advocates any of the specific proposals embodied in the table which go beyond voluntary actions of individual couples to space and limit births."

In the memo, Jaffe emphasized contraception as a means of controlling the population.

He argued that if contraception successfully curbed the birthrate, compulsory methods wouldn't be needed.

He wrote that "the achievement of a society in which effective contraception is efficiently distributed to all, based on present voluntary norms, would either result in a tolerable rate of growth, or go very far to achieving it."

"If this hypothesis is basically confirmed, it would negate the need for an explicit U.S. population policy which goes beyond voluntary norms," he said.