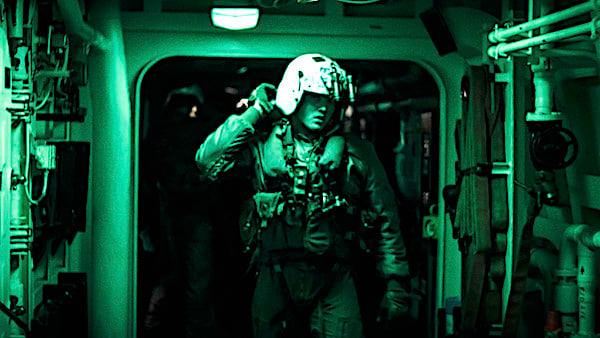 A U.S. Marine leads Marines through a passageway aboard amphibious transport dock USS Portland to departure for a helicopter raid off the coast of southern California, May 18, 2021. (U.S. Marine Corps photo by Staff Sgt. Donald Holbert)

An annual ranking of U.S. military strength has ranked the nation's armed forces as "weak" for the first time.

American armed forces are "at growing risk of not being able to meet the demands of defending America’s vital national interests," assessed the Heritage Foundation's 2023 Index of U.S. Military Strength, the Washington Examiner reported.

"It is rated as weak relative to the force needed to defend national interests on a global stage against actual challenges in the world as it is rather than as we wish it were," the index said.

"This is the logical consequence of years of sustained use, underfunding, poorly defined priorities, wildly shifting security policies, exceedingly poor discipline in program execution, and a profound lack of seriousness across the national security establishment even as threats to U.S. interests have surged."

The ranking is based on the overall ability to secure victories in two major conflicts at once in different areas of the world.

At the moment, however, the U.S. military may not be able to "meet the demands of a single major regional conflict" and would be "ill-equipped to handle two nearly simultaneous" conflicts.

The report evaluates each of the military branches based on capability, capacity and readiness.

The Marine Corps was at the top of the list with an overall "strong" rating. The Air Force fell to the bottom, with an overall "very weak" rating due to difficulties with pilot production and retention. The Navy and Space Force were rated as "weak" while the Army was "marginal." 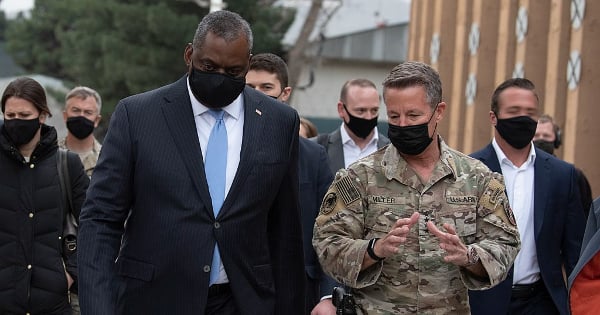 America's nuclear capabilities, according to the Heritage index, is "strong" compared to other countries but trending toward "marginal" and even "weak."

Earlier this month, amid vaccine mandates, complaints of "woke" policies and indoctrination, and a tight jobs market, the Army fell 25% short of its recruitment goal this year, about 15,000 soldiers.

The shortfall actually is worse, because the original target of 485,000 active-duty soldiers was cut by 12,000 in April and further reduced later to 466,000.

The AP said "the worsening problem stirs debate about whether America’s fighting force should be restructured or reduced in size if the services can’t recruit enough, and could also put added pressure on the National Guard and Reserve to help meet mission requirements."

Meanwhile, as Breitbart News reported in July, an Army training instructs soldiers to shower with transgender members of the opposite sex, even if they have not undergone a surgical transition. In February, the Army began discharging soldiers who refused to be vaccinated with the experimental COVID-19 vaccine, despite the fact the shots have proven to be ineffective in stopping infection and transmission of the disease. In addition, Department of Defense data indicate a massive spike in serious injuries and illnesses among military personnel coincided with the vaccine rollout in 2021.

The AP said it's "unclear how much the debate over the COVID-19 vaccine is playing in the recruiting struggles." To date, the Army has discharged more than 1,700 soldiers for refusing the vaccine.

Army Secretary Christine Wormuth said in a statement to the Associated Press that in the Army's "most challenging recruiting year since the start of the all-volunteer force, we will only achieve 75% of our fiscal year 22 recruiting goal."

Wormuth insisted the Army "will maintain its readiness and meet all our national security requirements."

"If recruiting challenges persist, we will draw on the Guard and Reserve to augment active-duty forces, and may need to trim our force structure," she said.

The AP said military leaders have tried to draw recruits through increased  enlistment bonuses and other programs. But they say it has become more difficult to compete with private industry in the tight labor market. Companies like McDonalds are attracting workers with tuition benefits and other increased perks that have military service attractive.

The Army also blames the shutting down of recruiters' access to schools, public events, fairs and other youth organizations due to the pandemic.

Further, only an estimated 23% of young people can meet the military’s fitness, educational and moral requirements.

The AP also noted "the patriotism that fueled the rush to military service in the wake of the Sept. 11 attacks has dimmed."

"Some may look around and see no more wars and terrorists to fight so they look elsewhere," the wire service said. "And others see lucrative hiring campaigns by private industry and know the salaries will be better than military pay, and they will be less likely to end up wounded or killed in those jobs."