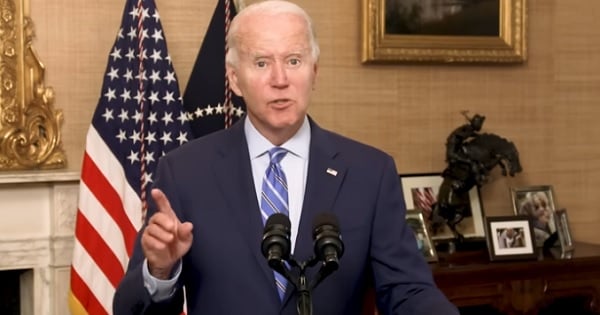 In 2020, exit polls indicated that President Trump won 12% of black voters and 32% of the Hispanic vote, a substantial improvement on Mitt Romney's numbers in 2012.

Now, a USA Today poll is showing ahead of the Nov. 8 midterm elections that 40% of Hispanics and 21% of blacks back the Republican Party candidate in a generic ballot.

The national paper said the "issue of inflation – and the feeling that the White House hasn’t done enough to address it – is helping Republicans score significant inroads among Hispanic and Black voters, both demographic groups that Democrats have long relied on for support."

Hung Cao is among 13 Asians, 33 Hispanics, 28 blacks and three Native Americans who are running for Congress as Republicans.

In an interview with Fox News on Thursday, he noted that Biden, amid crushing inflation, was talking on Wednesday about "leg room on airplanes, and how that's racist."

"We just want to be Americans," said Cao, a retired Navy Captain who served in Special Operations for 25 and now is challenging the Democratic incumbent in Virginia's 10th District.

"We came here for the American dream," he said. "We want to be called Americans."

33 Hispanic, 28 Black, 13 Asian, and 3 Native American Republicans are running for Congress, and we're all facing the same line of attacks from our opponents. While they deflect from issues voters care about, we're focused on ensuring all Americans can achieve the American Dream. pic.twitter.com/ZkpXfBG0aw

In May, a black media executive observed in a column for Newsweek that the Democratic Party "has a huge problem," noting "working class Hispanic voters and conservative Black voters are a lot more like their white counterparts than anyone in the Democratic Party had bargained for."

Democrats got a wakeup call in June when Mayra Flores won a special election in an 85% Hispanic district, becoming the first Republican elected to Congress in that area of South Texas in 150 years. But the trend has long been underway. In August, NBC News political correspondent Steve Kornacki told MSNBC viewers that "one of the major stories to emerge from the 2020 election was the shift we saw in the Hispanic vote."

And Morrow noted that without receiving more than 90% of the black vote, there never would have been a President Biden or a President Obama. A CNN analysis documented the party's loss of support among blacks over the past six years. And since taking office, Biden had gone from an 87% approval rating among black voters overall to 67% at the time of Morrow's column. In July, former Obama official and current CNN analyst Van Jones said that under Biden, life was "worse" for blacks, who were undergoing "a summer ... of real heartbreak" that was reflected in the polls.

'What have they done for our communities?'
Earlier this month, WND interviewed North Carolina Lt. Gov. Mark Robinson, who said the far-left ideology taking over the Democratic Party is at the heart of "a break for many black people" from the party.

"Many, many black people across this country are starting to take a look and say, 'Hey, what is this party doing?' And more importantly, 'What have they done for our communities? If they're really working hard for our communities, why have our communities been plunged into poverty for all these decades with no change?'"

Many blacks have become independents, he said, "and many, quite frankly, are leaving and becoming Republicans."

He believes "the core values" he learned from the Bible are in alignment with "how life works." In his many conversations with voters during his door-to-door work he is seeing first hand the shift toward conservative policies reflected in polling and the ballot box, attributing it in part to the increasing availability of alternative sources of information.