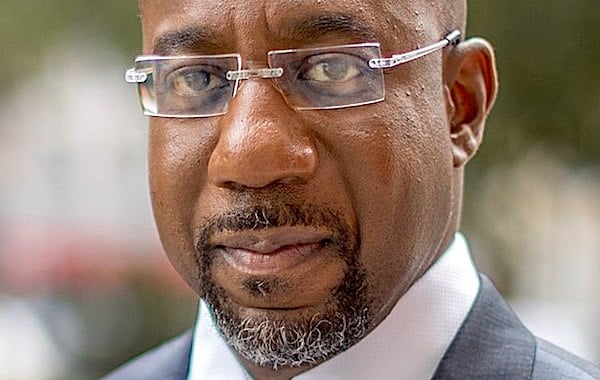 A new investigative report from the Washington Free Beacon documents how Ebenezer Baptist Church in Georgia, where Sen. Raphael Warnock preached before he moved to the Senate, has evicted poor people from a tower of apartments it owns over past due amounts as little as about $28.

While at the same time paying the senator $7,417 a month for the senator's "housing."

The scandal immediately caught the attention of commentators at Twitchy, who said, "How quickly do you all think the mainstream media will ignore this bombshell story about Raphael Warnock and his church? Gonna guess if Free Beacon didn't break this story we'd have never known about this shockingly bad story. Keep I mind, this is a church and this guy is a PASTOR."

The Free Beacon noted that Warnock, a Democrat, said on social media in August 2020, that, "Unemployment benefits have expired, rent is due today, and many Georgia families are at risk of eviction in the middle of a pandemic."

"It may be good political rhetoric, but Warnock’s Ebenezer Baptist Church, where the senator serves as senior pastor – drawing a salary as well as a generous $7,417 monthly housing allowance – has moved to evict disadvantaged residents from an apartment building it owns, one of whom it tried to push out on account of merely $28.55 in past-due rent," the report charged.

NEW: Records obtained by @FreeBeacon reveal Raphael Warnock's church, which pays him a $7,417 monthly housing allowance, secretly owns a low-income apartment building that tried to evict residents during the pandemic.

The report explained the church is the 99% owner of Columbia Tower at MLK Village in Atlanta, and the corporation operating the building filed a dozen eviction lawsuits against residents during the COVID-19 pandemic, from February 2020 to last month, involving a total of some $4,900.

The report pointed out that figure "could have been covered by one of Warnock’s monthly housing stipends from the church."

"The lawsuits were filed by Ebenezer Baptist Church’s business partner, Columbia Residential, the 1 percent owner of the building, which manages its day-to-day operations," said the report, which also pointed out the church closed out 2021 with "cash and 'cash equivalents'" of more than $1.2 million.

"They treat me like a piece of s---. They're not compassionate at all," Columbia Tower resident Phillip White told the Free Beacon.

He's a 69-year-old African American who says he served in Vietnam and received an eviction notice on Sept. 20 for failure to meet a $192 rent payment. He says he'll fight it but will do so without a lawyer, as he cannot afford one.

"It was Columbia Tower’s second attempt to evict White, who received his first eviction notice in September 2021 for $179 in past-due rent. That case was dropped after White paid up, plus an additional $325 in fees," the Free Beacon reported.

While the eviction fights were developing, Warnock was accusing his Senate race opponent that year, Kelly Loeffler, R-Ga., of failing to protect Georgia families by not supporting COVID-19 eviction moratoriums.

Since early 2020, 12 eviction lawsuits have been filed against residents of Columbia Tower at MLK Village, which Warnock's church owns 99% of.

The average rent owed by the residents clocked in at just $125 a month.

The building has received over $15 million in taxpayer funding.

The report said it wasn't clear if Warnock knew of the evictions going on at his church-owned complex "as he was railing against such actions," but he didn't respond with a comment.

The apartment complex describes itself as a refuge for those who have fallen on hard times, but the building also has benefited from more than $15 million in federal and state funding designated for helping shelter the chronically homeless since 2005, the report said.

As its ownership is a charitable group, the property, valued at about $1.72 million, has paid only $77.77 in property tax over seven years, the report noted.

One resident, who spoke anonymously out of concern for retaliation, said, "I understand churches take care of their pastors, but the excess, it’s not good. Not when you have people that need help here."

She said she had been a day late paying rent, "I put in the wrong card number. The money was in the bank but it didn’t go through. The next day I rectified the situation, but they still served papers. It was devastating and surprising. I know they have the ability to be patient with me and let me pay my rent. And it was paid. I asked for patience, but I was totally ignored."

The report said the church owns the tower through a network of shell organizations linked to the Ebenezer Building Foundation, a charity that assigns management duties to the church and identified Warnock as its principal officer in IRS filings.

A Fulton County marshal carried out a court-ordered eviction notice less than 3 weeks after Warnock sent this tweet.

Warnock now is running to keep his Senate seat in a race against Republican nominee Herschel Walker.