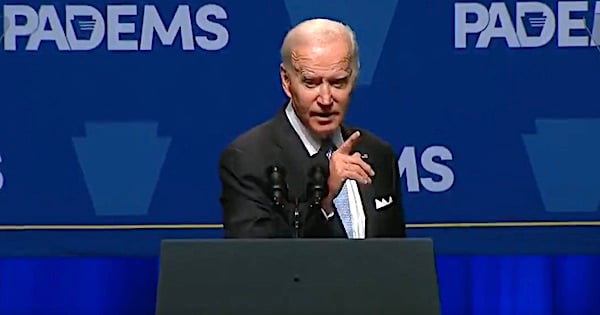 Democrat presidents seem to share the belief that they can decide how many states there are.

By the Constitution, the president does indeed, have many powers.

But the Constitution doesn't support the expressed statements by both Barack Obama and Joe Biden that they can determine the states.

It was Obama who said, during a campaign, there were 57 states that he'd visited "and one to go."

Now Joe Biden has claimed, incorrectly of course, that there are 54.

He didn't mention what happened to those that Obama apparently had visited that now are … gone.

Biden said, at a Democratic event in Pennsylvania, how his party was successful during the 2018 midterms because candidates talked about health care.

"And, of course, they're going try for their 499th time, or whatever the number is – they're still determined to eliminate the Affordable Care Act. And, by the way, if they do, that means – not a joke, everybody. That's why we defeated it in 2018 when they tried to do it. We went to 54 states."

Biden claims there are “54 states” pic.twitter.com/eIKn9VlBPM

But Republican firebrand U.S. Rep. Lauren Boebert, R-Colo., popped up with an immediate explanation for the difference between the 50 states that there are, and Biden's 54.

"I guess if you count the states of denial, confusion, delusion and disaster that his Regime has caused he just might be on to something," she said in a report at the Daily Wire.

Comedian Rob Schneider noted the Biden math could explain a lot, such as "the 81 million votes…"

Attorney Jordan Sekulow tweeted, "The leader of the Democrat Party and unfortunately for us, the President."

Biden has a lifelong history of making stupid statements that are nonsensical, such as telling a wheelchair-bound support to "stand up" so the crowd could see him, but he's also veered regularly into statements that clearly are simply wrong.

Those include his claim that he wasn't told ahead of time about the FBI raid on President Trump's home, even though court records show it was done at the request of the sitting president, about his knowledge of his son's international business dealings, about keeping ports open, about retrieving all Americans from Afghanistan, about a minor house fire in his home years ago, about how a "drunk" driver killed his first wife and daughter, and recently, when he made the wildly incorrect claim that gasoline was $5 a gallon when he took office.

It actually was in the range of $2.39. The price exploded to levels as high as $5, $6, and $7 a gallon in some locations after he took office and launched an all-out war on America's domestic oil and gas production industries.

At the time, commenters pointed out, "He does not mind lying because he has had that as a characteristic for 50 years in politics."

But each additional wildly incorrect statement does nothing to push back on the fear, expressed by many including doctors, that he's suffering from age-related dementia.