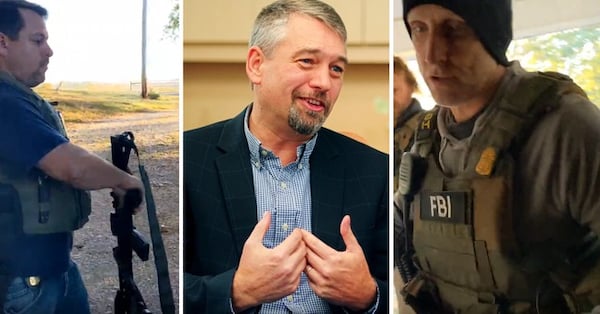 On the heels of a massive FBI raid to arrest a pro-life sidewalk counselor in Pennsylvania, the Biden Justice Department has arrested 11 activists for their part in a peaceful "rescue" protest in which they blocked access to an abortion clinic in Tennessee.

The dramatic arrest Wednesday of one of activists, Paul Vaughn, was captured by his wife, who can be heard pleading with four heavily armed agents for an explanation. She wanted to know why they had come to their home with guns drawn in the early morning hours, banged on the door and put her husband in handcuffs in front of their children.

The 11 activists were released after the 2021 incident on minor trespassing charges for blocking access to an abortion clinic by sitting down in the hallway leading to the entrance, singing hymns, reading the Bible and praying.

However, the Justice Department has charged them with violations of the federal Freedom of Access to Clinic Entrances Act – or FACE Act – stemming from their 2021 "rescue" at an abortion clinic in Mount Juliet, Tennessee. The federal law is punishable by more than 10 years in prison and fines of $250,000.

Townhall reported that after his arrest at home Wednesday, Vaughn was held in a federal holding facility, brought before a judge, charged, and then released without a wallet or a cell phone 60 miles from his home.

"For over six hours, no one knew where I was and why I was kidnapped from my home at gunpoint. It took a good attorney six hours to be able to break through the bureaucracy and find the people who know what was going on," Vaughn told Townhall.

Vaughn in president of a pro-life group called Personhood Tennessee.

He said he was getting his children ready for school, and with no warrant, no advance warning or opportunity to turn himself in, he was arrested and charged without legal counsel present.

Some of his children were in the backyard, he said, when an FBI agent armed with an AR-15 confronted them and questioned them. One child ran to her mother frantically crying, "The FBI is here, and they are arresting Daddy."

Vaughn's wife said: "They traumatized me and my children intentionally. We will never forget this."

Their children were left "shaken, frightened, and very upset."

See local TV coverage of the March 2021 event at a Tennessee abortion clinic:

Last month, as many as 30 FBI agents in tactical gear arrived at the Kintnersville, Pennsylvania, home of Catholic pro-life activist Mark Houck, his wife, Ryan-Marie, and seven children, and arrested him at gunpoint.

"My entire front yard, you could barely see it. It was covered with at least 15 big cars and trucks," Ryan-Marie Houck told Fox News host Tucker Carlson.

She said it was a "devastating" experience for her family, noting the children are undergoing counseling, and there is "a lot of crying and a lot of unrestful sleep."

"I mean it's hard to even express, the victimization and how traumatized we all are," she said.

Mark Houck was charged under the FACE Act for an altercation at a Philadelphia abortion business last year in which he shoved a man who was verbally abusing his 12-year-old son.

Townhall noted the 11 arrests on Wednesday coincided with Biden’s press conference marking 100 days since the U.S. Supreme Court overruled Roe v. Wade in which he announced tens of millions in grants to pro-abortion groups.

The United States Attorney’s Office for the Middle District of Tennessee announced the activists charged with "conspiracy against rights secured by the FACE Act, and committing FACE Act violations" are Chester Gallagher, 73, of Lebanon, Tennessee; Heather Idoni, 58, of Michigan; Calvin Zastrow, 57, of Michigan; Caroline Davis, 24, of Michigan; Coleman Boyd, 51, of Bolton, Mississippi; Dennis Green, 56, of Cumberland, Virginia; and Paul Vaughn, 55, of Centerville, Tennessee.