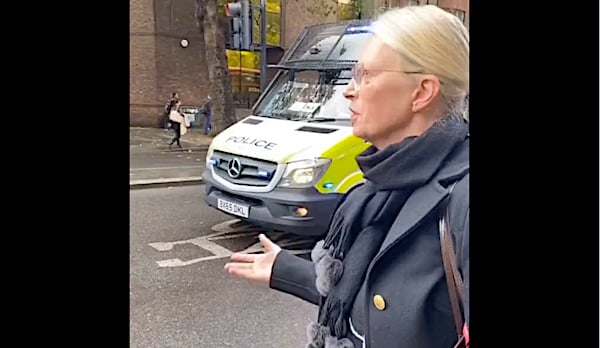 A woman in London talks to a climate extremist blocking traffic on Monday, Oct. 17, 2022. (Video screenshot)

Hundreds of radical protesters who apparently want the world's economy shut down through the cancellation of any oil products have been arrested for blocking roads in London in pursuit of their no-oil agenda.

A report from the Daily Mail explains the agenda to hinder commuters, stop ambulances and take over public roads has been ongoing for about two weeks.

And even mostly tolerant Londoners are fed up.

A woman whose day trip was brought to a halt by protesters sitting in the road told one of the protesters, who was arguing for the nation to prevent reaching a "tipping point," suggested the tipping already was at hand.

"I'm sorry you feel strongly about [that] but you know what, there are 6 million people that live in this city… and you're f***ing up their lives."

The woman told the protester, "Why you go and sit in the road in China or in India, or do something that might be useful."

Emissions from the use of fossil fuels in the Western world, in fact, pales in comparison to that generated by China, and other Asian points.

"Do you know the debris that comes from making those batteries?"

Another motorist decided to lend a hand, so to speak, at removing the protesters:

The Daily Mail reported the group of protesters breaking the law was from Just Stop Oil.

The road blocks included various points near St. George's Circus in Southwark, and the report said, "an ambulance on an emergency call also appeared to be blocked by the protest today." Other actions developed in Westminster, Piccadilly Circus and in front of Buckingham Palace

Some protesters glued themselves to the road.

Police officials said officers were "deployed" to protests, with arrests being made.

One of the protesters, Jane Thewlis, 60, commented to the Daily Mail, "My life's work has been to look after people and I can't bear to see the suffering caused by climate breakdown."

Another cited the urgency of the "worsening climate crisis."

Yet another claimed "billions" were "facing death" because of the use of oil and gas.

Police said they were obligated to wait for a determination that a protest met the legal threshold of causing major disruption before they could act.