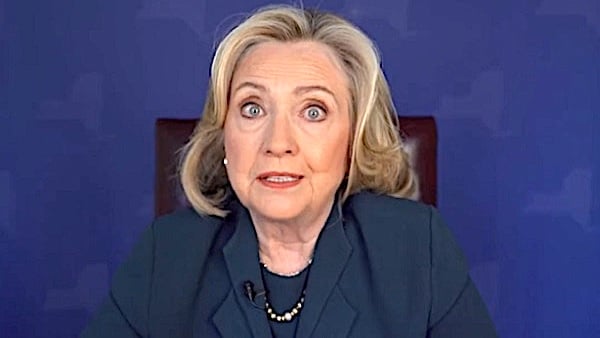 Longtime election denier Hillary Clinton, who has harped for years on how President Donald Trump was not legitimately in the White House, now is claiming that right wing interests already have a "plan" to "steal the next presidential election."

Her claim came in a video she posted online for a leftist organization called Indivisibles.

She claims: "Hello, Indivisibles. I'm here to highlight something that is keeping me up at night, and I know this group really understands what I'm about to say. I know we're all focused on the 2022 midterm elections and they are incredibly important, but we also have to look ahead, because you know what? Our opponents certainly are.

"But there's also good news in the face of this very real threat to democracy."

She then asks for money for the group Indivisible's political agenda.

A report at the PostMillennial pointed the twice-failed Democrat presidential hopeful "has repeatedly questioned the results of the 2016 election," which she lost by huge numbers to President Trump.

Her statements include that, "There was a widespread understanding that this election [in 2016] was not on the level. We still don’t know what really happened."

Actually, she and her campaign worked with Russia sources to fabricate the high-profile "Russia collusion" conspiracy theory that she, the FBI and the DOJ launched against Trump while he was a candidate and then continued while he was president, undermining a duly elected U.S. president.

The scheme used fabricated claims about Trump as evidence in an American court to obtain permission for the FBI to spy on the Trump campaign, a political opponent to the powers that held office under Barack Obama and likely would have held office under Clinton had she been elected.

A comment at the Gateway Pundit on Clinton's video was: "Democrats must really be worried that they won’t be able to steal the presidential election in 2024."

Much more election influence, actually, happened in the 2020 race, where Facebook's Mark Zuckerberg donated more than $400 million to several foundations that delivered it to local elections officials who often used it to recruit voters in Democrat districts.

Further, the FBI solicited social media companies to suppress accurate, but very damaging information about the Biden family's international business dealings just days before the election. Surveys have shown that either of those influences could have taken the victory away from President Trump and given it to Joe Biden, who likely would have been a loser except for those factors.

Further, various states simply changed or ignored their own state laws regarding mail-in ballots and more during the 2020 election.

The "plan" to which Clinton refers likely is a case now pending before the U.S. Supreme Court. It was launched in response to leftist courts overruling elected legislatures' decisions regarding election procedures.

NPR explains in the case state officials in North Carolina challenged a state court ruling that overturned the procedures adopted by lawmakers.

They point out that the U.S. Constitution states, "The times, places and manner of holding elections for senators and representatives, shall be prescribed in each state by the legislature thereof."

The logical conclusion of that requirement is that state judges should have no influence over those election "times, places and manner…"

Because of the supremacy clause in the U.S. Constitution, it also would mean that even a state constitutional requirement for such variables would not be controlling.

NPR said, "Proponents of the theory argue that that clause gives state legislatures power to regulate federal elections uninhibited by state courts or state constitutions. If a majority of the Supreme Court agrees, that would hamstring state courts, removing judicial oversight of state elections."

In North Carolina, state courts had overturned the congressional district lines drawn by lawmakers. Under the claims made in the case, state courts should have no power to change what the legislatures specify on these issues.

Actually, Democrats long have denied the legitimacy of GOP victories in elections, and the "election denier" status only turned into a bad thing when Trump contested Joe Biden's 2020 results.