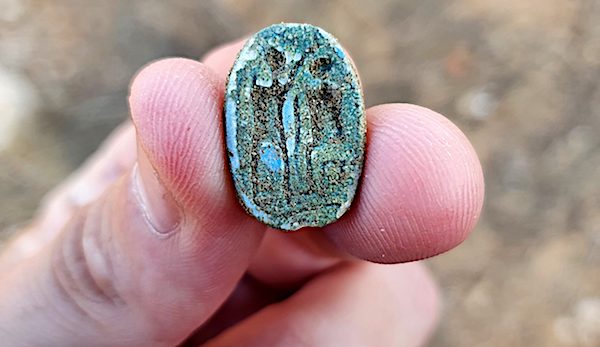 (ISRAEL365 NEWS) -- A 3,000-year-old scarab was found by some eighth graders on a school trip in Azor, just a few miles south of Tel Aviv, the Israel Antiquities Authority announced Wednesday.

Amulets in the shape of a dung beetle, scarabs were common among Egyptians, who considered their typical behavior of rolling balls as big as twice their size similar to an act of creation by their gods. However, their popularity transcended the empire’s borders and ancient scarabs have been found all over the region. In the case of the artifact unearthed in Azor, the craftsmanship suggests it was locally made.

“The scarab was used as a seal and was a symbol of power and status,” said Dr. Amir Golani, an IAA specialist of the Bronze Age period. “It may have been placed on a necklace or a ring. It is made of faience, a silicate material coated with a bluish-green glaze.”