Well, the midterm elections have come and gone. Unlike the predicted "red tsunami," what we got instead is a red spitball. This leads me to two possible conclusions: Either voter fraud was absolutely rampant, or America has a lot more stupid people than I previously assumed. Either way, the results will be dire.

Because so many Democrats retained their positions or got voted in, our nation will continue to barrel down the road on a collision course with inflation. In what's being called "The most telling chart on inflation you've ever seen," please consider the graph below: 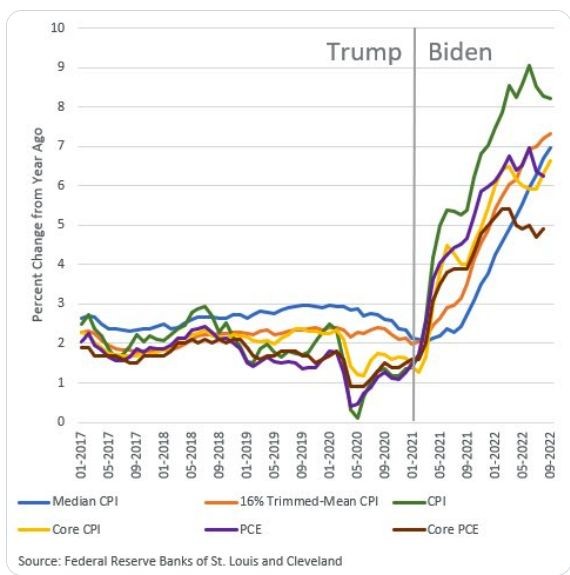 But hey, what's the big deal with inflation? The elites think it's good for us! It builds character!

Yes, really. University of California, Berkeley professor Brad DeLong said so in a September 2022 piece in Fortune magazine entitled "Why you should be happy about inflation and worried about something else, top economist Brad DeLong says." DeLong's take smacked strongly of the tone-deaf "Learn to code" advice Biden gave to displaced coal miners.

"DeLong argues that there is a major economic shift taking place that people should welcome," states the article. "It all has to do with our strange but kind of wonderful post-pandemic economy."

This is the kind of clueless drivel that makes the great unwashed masses so furious. Yes, we should all be thrilled to be paying three times the price for eggs!

Needless to say, Fortune was excoriated for this piece. "Hey @FortuneMagazine, your 'top financial historian' is clearly a moron," tweeted one critic. "Send @delong and this ignorant propaganda back to the 1930s where it belongs instead of using it to taunt millions of people who are hurting." Another commented, "When you are as rich as they are, toying with the little people is fun!"

But here's the thing: Fortune magazine isn't alone among the elites dismissing the impact of inflation. MSNBC's Joy Reid made the mind-boggling claim that American voters were essentially oblivious to the issue of inflation until conservative political candidates started talking about it. What planet is she from? Planet Clueless?

Meanwhile, according to this article, "Credit card debt continues to spiral higher as consumers struggle with rising prices and depleted savings. … Americans are burning up their plastic in order to make ends meet in these inflationary times. … By and large, the mainstream doesn't fret over growing consumer debt. In fact, many mainstream reports will tell you credit card spending is a sign of a healthy economy. A couple of months ago, MarketWatch reported, 'How much credit households use is seen as a good window into the strength of the economy. Consumers tend to borrow more when times are good and cut back when the economy is weak.' Meanwhile, Fed chair Jerome Powell keeps telling us that 'households are in very strong financial shape.'"

Yep. Planet Clueless. That's where these people reside. As the article notes, "People don't run up their Visa balance month after month to buy groceries when they are in 'very strong' financial shape."

In a pompous follow-up, the Washington Post printed an article called (apparently without irony) "Seven ways a recession could be good for you financially." Wow, Planet Clueless must have a bigger population than I thought.

Meanwhile, home ownership is nothing but a pipe dream for more and more Americans. Small businesses are coping with skyrocketing supply costs and struggling to pay rent (delinquencies are surging) due to higher rent inflation and fewer customers. One in six Americans are behind on their utility bills, one in four are skipping Thanksgiving due to high food costs, and many Americans are literally selling their blood (donating plasma) to eat. Yay! Let's hear it for inflation!

Oh, and for added fun, Biden promises to shut down coal plants and oil drilling all across America in favor of "wind and solar." Expect energy costs to skyrocket even further. Yay for inflation! Greetings from Planet Clueless!

But no worries, politicians are full of wise advice on how to handle the inflation they've created. For example, Rep. Sean Patrick Maloney, a New York Democrat, gave an example of how families should deal with sky-high food prices and inflation.

According to this article, "An interviewer reportedly asked Maloney, 'Hudson Valley residents are feeling pain at the pump and at grocery stores, what have you done, and what do you plan to do to help solve our inflation problem?'"

As their political representative, Maloney's stunningly insensitive reply caused outcries of fury: "Yeah, well, I grew up in a family where, you know, if the gas price went up, the food budget went down. So by this time of the week, we'd be eating Chef Boyardee if that budget wasn't gonna change. So that's what families have to do."

So there you have it. Advice from Planet Clueless: Let them eat Chef Boyardee.

"Maloney ignored the massive elephant in the room: what created all this inflation in the first place?" concludes the article. "Members of Congress earning six-figure salaries at the taxpayer's expense should not be encouraging their constituents to eat Chef Boyardee to deal with high prices. They should be fixing their disastrous policies that created this mess to begin with." The people of Planet Clueless know they don't have to answer to voters anyway, so why do they care?

What does all this mean? What are my conclusions from the midterm elections? It means we're on our own, folks. No one is going to swoop in and save us. The government – including RINO politicians – is going to continue to screw over the American people whether we like it or not. Brace yourselves and plan accordingly.