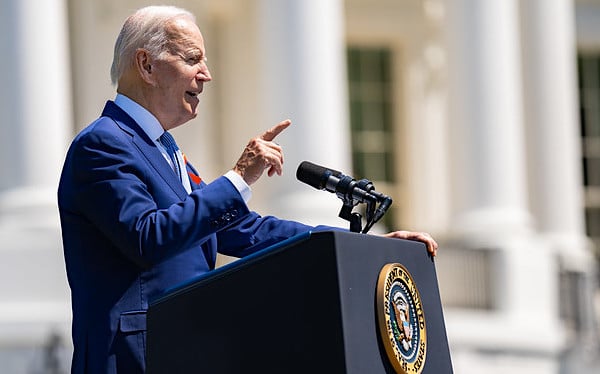 The Associated Press apparently wants people to believe, and is trying to convince them, that the scandals involving Hunter Biden don't involve Joe Biden.

But constitutional expert Jonathan Turley has caught the news service, and called it out.

It happened in AP reporting on the new Republican majority in the U.S. House and promises from members that their investigations will include Hunter Biden's various international business deals, some of which netted him millions of dollars from suspicious sources in Russia and China. And included Joe Biden.

Joe Biden already is on record boasting about how he shut down an investigation into a Ukrainian company that was paying Hunter Biden thousands of dollars a week be on its board.

In fact, as vice president, he ordered Ukrainians to fire a prosecutor investigating the company that had hired Hunter or else he'd shut down American aid. Ukraine, in fact, then fired the prosecutor.

According to a report at Twitchy, Turley noted that the AP was claiming, "Joe Biden has said he's never spoken to his son about his foreign business, and nothing the Republicans have put forth suggests otherwise."

Twitchy reported, "Someone at the AP apparently realized that they couldn't actually get away with the claim that Republicans haven't presented any evidence that Joe Biden knew about Hunter's shady business abroad, because the passage received a bit of a tweak job."

Does the Associated Press have any credibility as a truthful news source?
1% (1 Votes)
99% (83 Votes)

The AP appears to have removed its claim that there is no evidence to suggest that Joe Biden spoke with Hunter about his business dealings. https://t.co/Pu8NLYFe5f It now says "there are no indications that the federal investigation involves the president."https://t.co/sCAcQT9bBd

The changed story line "now says 'there are no indications that the federal investigation involves the president.'"

But the lawyer, a professor at George Washington University, said, "The revision creates a new problem. Rather than simply stating the fact, AP seems to struggle to shield the president. There is every indication that 'the federal investigation involves the president.' Not only is the president discussed in key emails under investigation, but the grand jury heard testimony that the 'Big Guy' is Joe Biden.'

That brings us back to Houdini’s trick of making his 10,000 pound elephant Jennie disappear every night in New York’s Hippodrome. He succeeded night after night because the audience wanted the elephant to disappear even though it never left the stage.

I previously wrote about how the key to the trick was involving the media so that reporters are invested in the illusion like calling audience members to the stage. Reporters have to insist that there was nothing to see or they have to admit to being part of the original deception. The media cannot see the elephant without the public seeing something about the media in its past efforts to conceal it.

The media is now so heavily invested in the trick that they are sticking with the illusion even after “the reveal.” The Associated Press story shows that even pointing at the elephant — heck, even riding the elephant around the stage — will not dislodge these denials. This is no elephant because there cannot be an elephant. Poof!

He explained that "it is routine to read media stories denying the facts or dismissing calls to investigate the foreign dealings" of the Bidens.

He called the AP's move "a whopper."

He pointed out that an audiotape has confirmed Joe Biden leaving a "message for Hunter specifically discussing coverage" of the business schemes.

He said, "Some of us have written for two years that Biden's denial of knowledge is patently false. It was equally evident that the Biden family was selling influence and access."