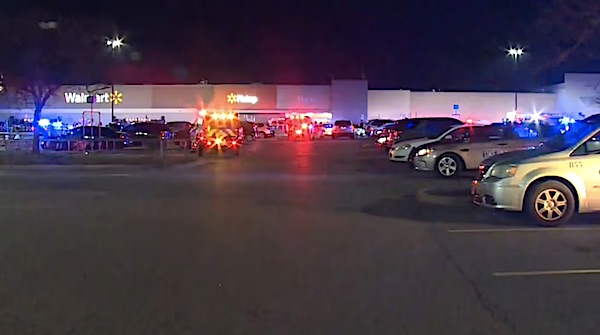 The scene of a mass shooting at a Walmart store in Chesapeake, Virginia, on Tuesday night, Nov. 22, 2022. (Video screenshot courtesy WAVY-TV)

Authorities Friday revealed a “death note” from the phone of the deceased Chesapeake, Virginia, Walmart shooter, which accused coworkers of wronging him.

The shooter, Walmart employee Andre Bing, wrote a statement entitled “death note,” which claimed multiple employees had previously given “subtle code speeches” and his phone had been hacked. It said he would spare one person because he had a “special place for her” in his heart due to his mother having died of cancer.

Bing, 31, killed six people and himself, wielding a handgun and carrying multiple magazines while wearing civilian clothing, according to a media release from the city of Chesapeake. The city posted an image showing at least part of the statement on Twitter.

As the investigation has progressed, detectives conducted a forensic analysis of the suspect’s phone, which was located at the scene. This note was located in the device. (1/3) pic.twitter.com/uCAvAZgYWP

Bing alleged hearing that someone “had been trying to get rid” of him “since day one,” after which he “lashed out.”

“The associates gave me evil twisted grins, mocked me and celebrated my down fall the last day,” the statement read in part. “That’s why they suffer the same fate as me.”

Another employee who appeared in widely shared Facebook livestream footage said the shooter was a manager at the store, Newsweek reported. The employee identified him by name as “Andre.” At least 50 people were at the store when the shooting happened, the city’s media release reported.

A candlelight vigil honoring the victims is scheduled to be held Monday.