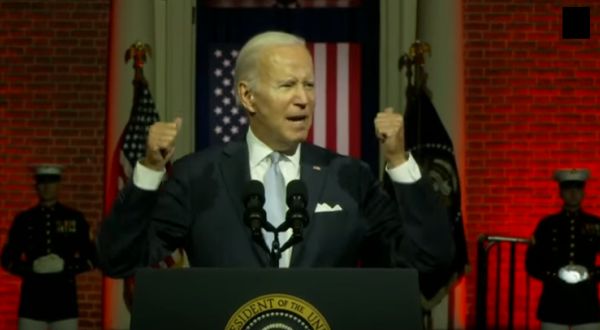 Joe Biden is being warned about his "reckless rhetoric" that is inciting violence.

He took to his podium again this week and unleashed a rant on the Democrats' main talking point leading up to the 2022 midterm elections: that voting against them is a vote for the destruction of democracy.

It's been echoed back and forth by many Democrats in recent weeks and months, including, notable, Hillary Clinton.

But constitutional expert Jonathan Turley is warning it's an unwise strategy.

"Democrats and the J6 Committee are pursuing those who engaged in similar inflammatory rhetoric leading up to the January 6th riot. The airways are also now filled with Democrats warning from leaders like Hillary Clinton [] that the midterm elections are 'about to be stolen.' Likewise, many are campaigning to ban books by figures like Justice Barrett in the name of protecting free speech," he wrote.

"It is all perfectly Orwellian, but it is not particularly effective. With the over-the-top rhetoric and open bias in the media, the public is tuning out many in the press (which is at record lows in trust). This is becoming a type of primal scream session among friends, cathartic but confined," he continued.

"President Biden was widely criticized for his Philadelphia speech, but he and others are now doubling down on this type of reckless rhetoric. The likely effect will be to incite further violence and to give license to the most unhinged in our society."

He noted, "Last night, President Joe Biden returned to his earlier claim that his political opponents are fascists seeking to establish authoritarianism in the United States. While the hellish red background is gone from his controversial Philadelphia address, the message remains: a vote for the GOP is a vote for tyranny. Despite polls showing citizens view the President as inciting political unrest and potential violence with such attacks, the theme was quickly picked up and magnified in the media. Presidential historian Michael Beschloss actually suggested on MSNBC that we could be just days away from an authoritarian hellscape if the GOP prevails in midterm elections — raising the specter of our children being taken away and killed."

Beschloss, in fact, threatened, "[S]ix nights from now, we could all be discussing violence all over this country. There’s signs that may happen, may God forbid, that losers will be declared winners by fraudulent election officers, or secretary of state candidates, or governors, or state legislatures… We could be six days away from losing our rule of law, and losing a situation where we have elections that we all can rely on. You know, those are the foundation stones of a democracy… Joe Biden is saying the same thing tonight, and a historian 50 years from now – if historians are allowed to write in this country and if they are still free publishing houses and a free press – which I’m not certain of – but if that is true, a historian will say what was at stake tonight and this week was the fact whether we will be a democracy in the future, whether our children will be arrested and conceivably killed."

Turley warned that, according to Democrats, "The choice is now voting Democratic or lining up your children in front of a firing squad. (Strangely, it will only be our children and not adults targeted by the roaming GOP goon squads). However, it will all be 'off-the-books.' After all, Beschloss warned Hayes, 'we both write history, you and I' and he is not certain that 'historians [will be] allowed to write in this country' if Republicans gain a majority in Congress."

Also alarmed was Fox News host Jesse Watters, who tried to counsel Biden that the election won't really be subject to questioning, since it'll be a "blowout."

The Daily Caller News Foundation reported he said, "That was the president of the United States confessing he is about to get wiped out a week from now. No one is going to question the results of this election Mr. President, because it’s going to be a blowout. It’s not even going to be close."

Biden claimed Republican candidates won't accept the election results if they lose, charging that, "Democracy is on the ballot for all of us. We know that more and more ballots are cast in early voting or by mail in America. We know that many states don’t start counting those ballots till after the polls close on Nov. 8th. That means in some cases we won’t know the winner of the election for a few days after the election."

Previously Biden bashed Donald Trump supporters as "a threat to democracy" on Sept. 1, when in an ominous red-light-flooded speech in Philadelphia he made the wild claims.

Kayleigh McEnany, former White House press secretary, explained, "The reason this speech happened, Jesse, the sole reason in my view, is this administration saw the Wall Street Journal poll today. Suburban white women swinging back to the Republican Party to the tune of 27% is the swing. The number two issue they cited was threat to democracy. So they leaned into that. They said democracy over and over and over."

"As Democrats become more and more threatened with a red wave, GOP lawmakers say that Biden has further shifted his focus to attacking the opposing Party and former President Donald Trump as a deflection for the flailing economy and his inability to defend his own record," the report explained.

Biden blamed Trump for "the recent attack on House Speaker Nancy Pelosi's husband Paul," and "again levied blame on Trump's supporters for rising instances of political violence – a frequently-criticized line from his Philadelphia speech in September, which was also labeled as 'divisive'," the report said.

Voters this election say their top priority is the economy, which has been decimated by Biden's policies and has given the public exploding inflation, high interest rates and unstable markets. Gasoline prices under Biden have surged to as high as $7 a gallon in some cities.

Biden claimed the problems all are attributable to President Trump, charging his claims the 2020 election was stolen were disproven, with, "There's no election in our history that we can be more certain of its results."

In fact, there were at least two influences on the 2020 results that analysts, studies and polls confirm almost undoubtedly changed the winner from Trump to Biden.

Those were Mark Zuckerberg's decision to hand out some $400 million to foundations to give to local election officials who often used that money to recruit voters from Democrat districts. That money was outside the ordinary system that regulates election spending.

Further, the FBI lobbied Big Tech just days before the election to suppress accurate but very damaging information about the Biden family's international business operations and keep the public in the dark on those scandals.

In response, House GOP Leader Kevin McCarthy said, "President Biden is trying to divide and deflect at a time when America needs to unite—because he can't talk about his policies that have driven up the cost of living. The American people aren't buying it."

"Desperate and dishonest. Joe Biden promised unity but has instead demonized and smeared Americans, while making life more expensive for all. While Republicans remain focused on the issues that matter most to voters, Biden and Democrats are flailing in the final days because they have lost touch with the concerns of families struggling to get by," charged Republican National Committee Chairwoman Ronna McDaniel.