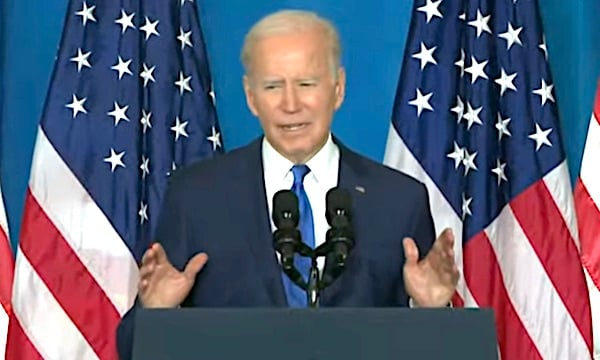 Previewing Joe Biden's speech Wednesday night ahead of next week's midterms, press secretary Karine Jean-Pierre told reporters the president sought to warn voters of "an alarming number of Republican officials" who are "being very clear they're not going to accept the results of these elections."

She offered no examples to back her claim as polls indicate a growing "red wave" in which Republicans are competitive in many Democratic strongholds and are poised to regain the House and the Senate.

Most voters, according to surveys, say inflation is their chief concern. But Biden, at the Columbus Club at Union Station near the Capitol on Wednesday evening, insisted democracy itself is on the ballot.

A vote for Republicans, he said, is a vote for "the dark forces that thirst for power."

"We're facing a defining moment," said Biden. "We must with one overwhelming, unified voice speak, as a country and say there's no place for voter intimidation or political violence in America."

The president said it's estimated that more than 300 Republican "election deniers are on the ballot all across America this year."

"This is not about me. ... It's about the durability of our democracy," he said.

White House communications adviser Anita Dunn explained Wednesday morning that the venue for the speech was Capitol Hill "because that's where there was an attempt to subvert our democracy," referring to the Jan. 6, 2021, Capitol riot.

The host of the speech, the Democratic National Committee, said the Union Station speech was about "preserving and protecting our democracy" and "the threat of election deniers and those who seek to undermine faith in voting and democracy."

“Donald Trump and the MAGA Republicans represent an extremism that threatens the very foundations of our republic," the visibly angry president declared.

The president said the "MAGA Republicans," are "determined to take this country backward," charging they "promote authoritarian leaders and they fan the flames of political violence."

'Mega MAGA Republicans'
At the White House briefing Wednesday, Jean-Pierre said in her opening remarks that Biden has talked about the nation "being at an inflection point."

"He has been clear, democracy is under assault and we cannot pretend otherwise," she said.

The Biden spokeswoman said the president "will continue to call attention to the threat to democratic integrity and to public safety posed by those who deny the documented truth about election results and those who seek to undermine public faith in our system of government."

"Unfortunately," she continued, "we have seen mega MAGA Republican officials who don't believe in the rule of law."

Jean-Pierre said these officials "refuse to accept the results of free and fair elections, and they fan the flames of political violence through what they praise and what they refuse to condemn."

'Election denier' Karine Jean-Pierre
One of the "election deniers" the White House undoubtedly had in mind was the Republican nominee for governor in Arizona, Kari Lake. On the campaign trail this month, a reporter brought up the issue, and Lake was prepared.

Lake, noting Democrats have been challenging the legitimacy of election outcomes since 2000, read from a list of quotes that included Hillary Clinton and Stacey Abrams, who is running for governor again in Georgia after insisting the results of her first attempt were illegitimate.

"A Democrat was saying that. Is that an election denier?" Lake asked the reporters.

These people truly do not care what's coming to them at the ballot box. pic.twitter.com/Ly04naZE83

The Republican National Committee created a video compiling 10 minutes of Democrats questioning the legitimacy of elections:

Here is something the January 6 Committee doesn't want you to see.