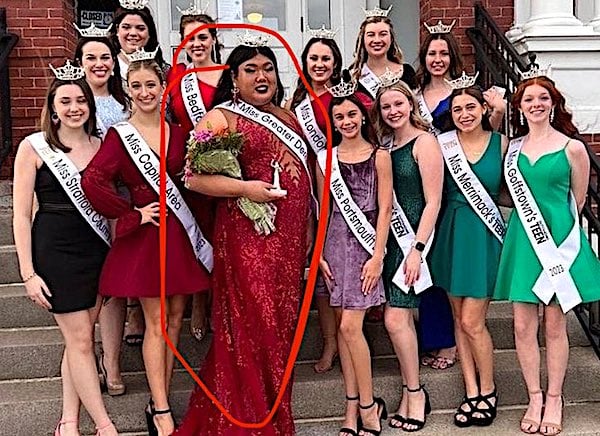 Brian Nguyen is the winner of the Miss Greater Derry 2023 beauty pageant in New Hampshire. (Twitter)

There was one BIG winner of the Miss Greater Derry 2023 beauty pageant in New Hampshire.

He introduced himself on social media as Brian Nguyen, 19, a freshman at Nashua Community College.

But his name, age or attendance at school are not what grabbed attention.

It was his size, roughly twice that of any of the other contestants in the competition for a scholarship.

A biological male won “Miss Greater Derry” which is a beauty pageant in New Hampshire under the “Miss America” organization. pic.twitter.com/aME4Gd4bhm

A commentary at the Gateway Pundit that said, "HUGE Trans Man Wins New Hampshire Beauty Contest – Weighs Twice as Much as Closest Competitor."

Social media responded with, among other comments, "Thanks for circling him. Was struggling to pick him out there for a minute!"

And another said, "Well it was in New Hampshire so amazing it wasn't a farm animal that won."

A report at the Post Millennial said Nguyen was the "first transgender titleholder within the Miss America Organization after being crowned Miss Greater Derry 2023."

It explained the local pageant is a preliminary event to the Miss New Hampshire and Miss America Pageant.

And the report continued, "Others pointed out the obvious double standard that if an obese woman tried to enter a beauty pageant, she wouldn’t even make it past the first stage. From photographs shared on social media, it would appear that the assessment of physical fitness in the swimsuit competition is still on the agenda, but the term physical fitness seems to have been redefined along with the word woman."

The report pointed out a federal judge recently found that the Miss United States of American pageant could not be forced to allow transgender contestants.

Nguyen, on social media, said he was studying business management and hopes to use his degree "so that I can create sustainable, ethical, and inclusive products such as clothing, cosmetics, and accessories."

He also intend to continue "to grow my career in the modeling and social media industry."