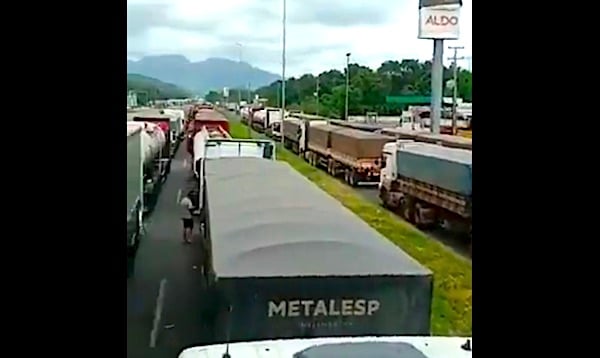 🚨 BRAZIL: Highways are completely gridlocked in more than 50 locations.

The President of the liberal party is reportedly submitting evidence of fraud before the Supreme Court today, which protesters hope overturn the results of the election.pic.twitter.com/SeTBrIj5Nw

In a voice message published by columnist Mônica Bergamo, Judge Augusto Nardes of the Federal Court of Accounts (TCU) allegedly was discussing a military coup with President Jair Bolsonaro. In the recording, Nardes said he has “a lot of information” about “strong movement in the (Army) barracks”. Nardes allegedly said “that (there will be) a very strong outcome in the nation, unpredictable … in a matter of hours, days, at most, a week, two, maybe less.”

Apparently someone forwarded a WhatsApp message from the Judge to the journalist. The call was interpreted as referring to potential preparation of a military coup to prevent the inauguration of convicted Communist criminal Luiz Inácio Lula da Silva as President in January. Judge Augusto Nardes has announced his resignation over the call.