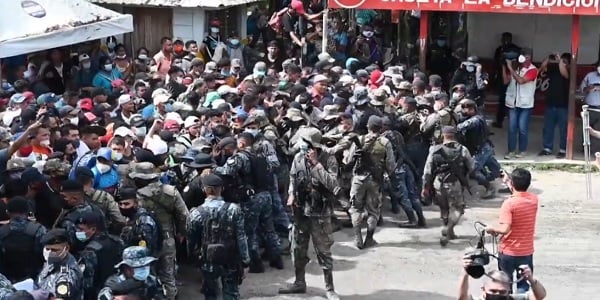 New York’s legal system is plunging into chaos over the huge influx of migrants coming to the state, according to The New York Times.

The surge in migrants coming to New York from the border are overwhelming the Immigration and Customs Enforcement (ICE) field office in Manhattan, the Times reported Thursday. New York City, which already is one of the top states for immigration backlogs, has received thousands of migrants bused by Republican Texas Gov. Greg Abbott, who is attempting to send a message to sanctuary cities and the Biden administration about the surge in illegal migration border states are struggling to support.

Over 21,000 migrants have come to New York City, adding to the around 180,000 pending cases sitting in the hands of just 88 judges in New York State immigration courts, according to the Times.

An ICE employee stationed on the scene in Manhattan was telling people waiting for their appointments that the office had reached capacity as 500 people were inside, according to the Times.

“Take the email and go home,” the ICE employee said, according to the Times.

For the migrants awaiting their appointments, that made the situation all the more chaotic and confusing.

“I thought they were going to attend to me today,” Mr. Perez-Trompetero, 29, a migrant from Venezuela who appeared at the office based on an ICE order to show up that day and was turned away, told the Times. “We don’t just want to live, we want to finish the process quickly.”

“That’s playing games,” Brooklyn based Severino Macias, who came with his daughter-in-law who arrived from Ecuador in September. “What’s going on?”

Some migrants are receiving their first court dates that come after their deadline to apply for asylum within one year of their arrival, according to the Times. On top of that, there’s a shortage of immigration attorneys and advocates.

When migrants near their deadline, the courts should expect to be even more overwhelmed, Maryann Tharappel, who directs immigrant and refugee services at the Catholic Charities of the Archdiocese of New York, warned, according to the Times. Asylum cases can take up to five years to actually be heard.

The problem is only expected to worsen with over 2.3 million migrants U.S. Customs and Border Protection (CBP) encountered in fiscal year 2022. During fiscal year 2021, there were around 1.7 million open asylum cases and, of the cases heard during that time period, judges granted about 14% of them.