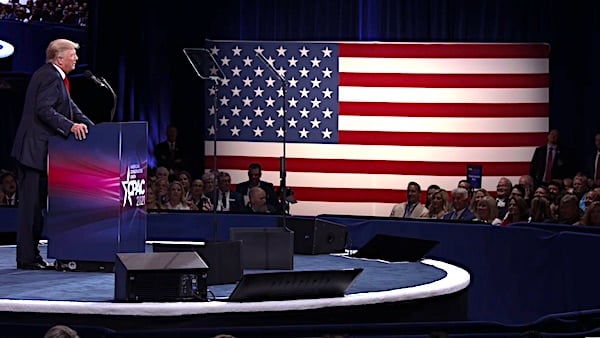 House Democrats are attempting to block former President Donald Trump from running in the 2024 presidential election by invoking a constitutional amendment, according to Politico.

Democratic Rep. David Cicilline circulated a letter among other House Democrats urging them to back legislation that would invoke the 14th Amendment to stop Trump from running in the 2024 election, arguing that his challenged to the 2020 election and actions preceding the Jan. 6 Capitol riots render him ineligible, according to a report by Politico. The 14th Amendment bars anyone who has engaged in an “insurrection or rebellion” from holding certain public offices, including the presidency.

“[No person] shall have engaged in insurrection or rebellion against the same, or given aid or comfort to the enemies thereof. But Congress may by a vote of two-thirds of each House, remove such disability,” the amendment reads.

Following the protest at the Capitol on Jan. 6, Trump has adamantly denied a part in instigating the event; he was subpoenaed to testify before the Jan. 6 committee in October, though he never testified, filing a lawsuit to prevent his appearance before the committee.

Will Democrats succeed in their claim that Trump is ineligible to run for president?
6% (25 Votes)
94% (407 Votes)

Rep. David Cicilline (a former Trump impeachment manager) is circulating a letter to Dems rounding up support for legislation to bar Trump from office under the 14th Amendment, per copy I obtained: pic.twitter.com/BsDNbhjPUg

“The legislation details testimony and evidence demonstrating how Donald Trump engaged in insurrection against the United States,” the letter reads.

Trump launched his third presidential campaign on Tuesday, focusing on the perceived successes of his first term and targeting inflation, the open border and record-breaking gas prices under the Biden administration during his announcement speech.

“I am officially running for president of the United States, and we are going to make our country great again,” Trump said.

Cicilline and Trump did not immediately respond to the Daily Caller News Foundation’s request for comment.