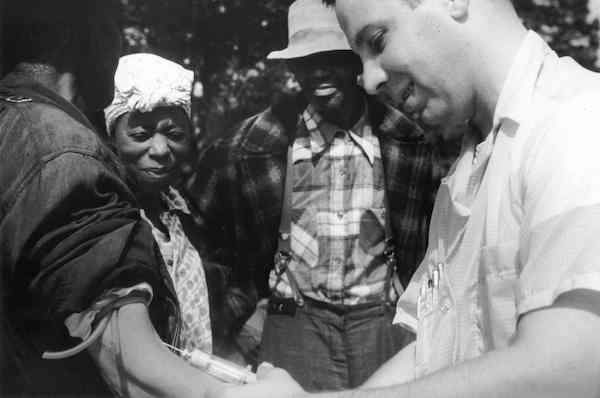 CDC Director Rochelle Walensky's tweet Wednesday drawing attention to the 50th anniversary of a dark episode in the medical establishment's history is having the unintended effect of putting a spotlight on her agency's latest malfeasance.

Walensky, emphasizing the CDC's "commitment to ethical research and practice," was remembering the hundreds of black men who suffered the notorious Tuskegee syphilis study, honoring their "sacrifice."

Her tweet prompted a flood of responses pointing out not only that "sacrifice" wasn't the way to describe what happened and that the CDC's documented suppression of crucial data on the COVID-19 pandemic and the mRNA vaccines is causing untold suffering at the moment.

"Whoever wrote and approved this tweet is probably higher level than an intern. Since it's on the CDC director's official account, it's probably the social media manager for the CDC, a high level government job," she said. "And I'd guess @CDCDirector herself approved it. Disgusting."

This year marks the 50th anniversary of the end of the Tuskegee syphilis study. Tomorrow, I will be joined by colleagues & #PublicHealth leaders as we honor the 623 African American men, their suffering & sacrifice, and our commitment to ethical research and practice. https://t.co/cbR8Shy0Db

The Tuskegee Study of Untreated Syphilis in the Negro Male was conducted between 1932 and 1972 by the United States Public Health Service and the CDC, which was formed in 1946. It observed the effects of syphilis when untreated on 400 black men, who were mostly poor sharecroppers. However, after penicillin became available in the early 1940s as a treatment for syphilis, the study subjects were denied access. Further, the researchers didn't inform the men they had syphilis, calling it only "bad blood." More than 100 died.

"This tweet is abhorrent and you are a disgraceful human being. We will NOT forget this."

In February, unnamed CDC officials admitted to the New York Times that the agency withheld critical pandemic data "because they might be misinterpreted as the vaccines being ineffective." In January, during a Senate hearing, Walensky and White House coronavirus adviser Dr. Anthony Fauci dodged a Republican senator's inquiry about the estimated number of deaths caused by COVID-19 vaccines during a hearing on Capitol Hill. Walensky said she would follow up with an answer but has never fulfilled that promise.

In March, Walensky admitted in a letter to Sen. Ron Johnson, R-Wis., that the CDC gave false information about its COVID-19 vaccine safety monitoring.

As WND reported, Walensky admitted in March the CDC exercised "too little caution and too much optimism" about the effectiveness of the vaccines; had a sophisticated COVID data system (while, as the New York Times reported, the agency withheld data from the public); gave the public the impression science is "foolproof"; and didn't balance the risk of COVID-19 with the unintended consequences of mitigation efforts, such as opioid deaths and "mental health challenges."

Later, the watchdog Government Accountability Office concluded in an investigation that CDC and FDA officials "suppressed" scientific findings related to the COVID-19 pandemic due to political pressure.

In July, internal documents confirmed there was direct coordination between the CDC and Big Tech companies on censoring skepticism or criticism of COVID-19 vaccines.